When the iPhone 4S was first released and Siri was introduced it amazed a lot of people. Now, with the iPhone 4S jailbroken, developers are free to extend Siri’s functionality to their hearts content and once again amaze people with the now endless list of possibilities. Including new Siri actions, the ability to control more functions of your iOS device with Siri and the ability to create your own custom Siri commands.

Are you looking for Cydia tweaks to modify and extend the functionality of Siri on your iPhone 4S or other iOS device with Spire installed? Well, if you are then you will be glad to know this page is dedicated to the most noteworthy Siri tweaks that are available. It is constantly updated with the latest Siri Cydia tweaks, and is one of the best resources on the Internet for Siri Cydia tweaks.

We told you about an upcoming Cydia tweak called Sireet that would allow you to make tweets using Siri on your jailbroken iPhone 4S. If this Cydia tweak sounded like something that would interest you, then you will be glad to know that it has now been released into Cydia. Simply download and install the Sireet Cydia tweak to your jailbroken iPhone 4S, ensure the Twitter is configured through the Settings.app, and then open Siri and speak “Tweet, whatever you want to say.” Sireet will then convert your spoken tweet into text and will automatically make a tweet out of what you just said. 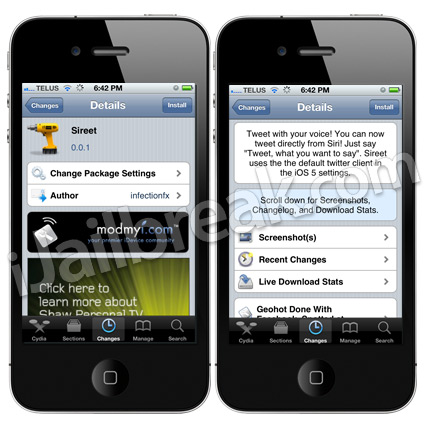 You can find it in Cydia through the ModMyi repo for FREE.

If you have checked out our Siri Cydia tweaks section above and found you could not accomplish the level of customization you envisioned. You will be glad to know in the Siri Hacks And Mods section below by iJailbreak.com you will learn how to perform advanced customizations to Siri. These customizations often involve SSHing into your iPhone 4S’ filesystem to edit or add  files, involve using command line tools on your desktop computer and may even involve other advanced tasks.

These advanced Siri mods and hacks, however, will allow you to create custom Siri conversations or create your Siri server (for example). Things that a Cydia tweak could generally not compete with. Thus, without further a due, you can browse below to find some of the best Siri hacks and mods for your iPhone 4S or other iOS Device with Spire installed.

Setup A Siri/Spire Proxy Server
When you create a custom proxy server for your iPhone 4S you will be able to do absolutely anything with Siri. People have been able to make Siri start their car, control the lights in their house and so much more! Additionally, when you create your own Siri proxy server you will be able to share the functionality of Siri with older iOS Devices using the Spire Cydia tweak.

Get Siri On Older iOS Devices

If you would like to get Spire on your older generation iPhone, iPod Touch or iPad you are in luck! Thanks to the Spire Cydia tweak this is now possible. You can get a fully working version of Siri on your iPhone 4, iPhone 3GS, iPod Touch 4G, iPod Touch 2G, iPad 1G and even iPad 2G as long as you have access to a Spire proxy host (either make your own, or buy a spot on a server).

UPDATE #1: You can find an updated list of Cydia tweaks and applications available for iPhone, iPod Touch and iPad.