According to a new rumor, an iOS 8.4.1 untethered jailbreak could be released soon. Jailbreak tweaks developer, Luca Todesco, sent out a tweet telling users to downgrade to iOS 8.4.1 if they wanted a jailbreak.

Apple patched the TaiG iOS 8.4 jailbreak in iOS 8.4.1 and has followed with releases of iOS 9 and iOS 9.0.1. Both the iOS 9 firmwares are not jailbreak friendly, which means, that if you still wanted a jailbreak, you’d have to downgrade from iOS 9 to iOS 8.4.1. Lucky for you, iOS 8.4.1 is still being signed by Apple.

We cannot guarantee the authenticity of this jailbreak rumor, but the developer seems pretty confident. He also stated on Twitter that he will release the jailbreak even if Apple stops signing iOS 8.4.1. 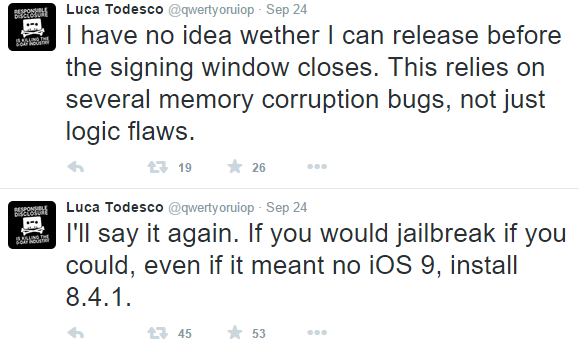 As of now, there have been no updates from TaiG or Pangu regarding an iOS 9 jailbreak. And we’re not sure if that $1 million bounty is going to yield any results.

iOS 9 has caused a lot of problems for users, so if you’re still unhappy with iOS 9/9.0.1, then you can go back to iOS 8.4.1 and hopefully even jailbreak. We’re not sure when the developer plans on releasing this iOS 8.4.1 jailbreak to the public, but we’ll let you know as soon as it’s available for download. Don’t forget to downgrade to iOS 8.4.1 if you want a jailbreak!

Jailbreak is not your thing? Liking all the new stuff in iOS 9? Well, then this news shouldn’t concern you in any way. Continue using iOS 9.0.1 and Apple will keep providing timely updates, starting with iOS 9.1.

Update #1: The signing window for iOS 8.4.1 has now be closed. This means you can no longer downgrade to iOS 8.4.1 on iPhone, iPad and iPod Touch.