The iOS 9 release didn’t go as well as expected for Apple. The update has caused a lot of issues for users, including bricked devices thanks to ‘Slide to Upgrade’ bug. If you’ve been facing that particular bug and our fix didn’t work for you, then you must upgrade to iOS 9.0.1 now. 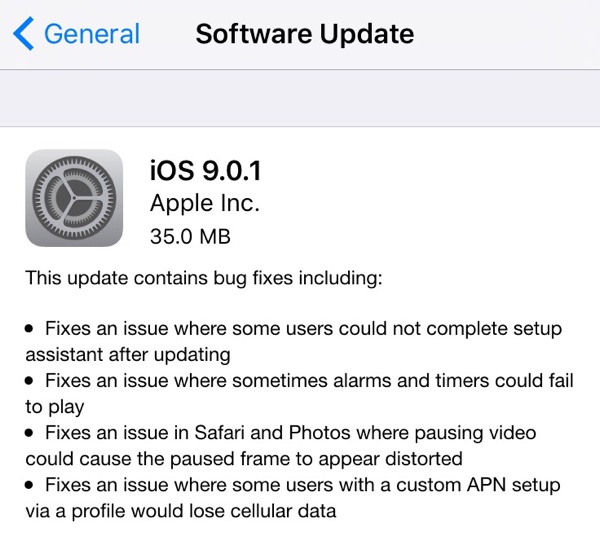 Those who were successful in installing iOS 9, have been plagued with slow performance, lag and battery life issues. Many users have complained that after updating to iOS 9, their devices were much slower and had a lot of lag. Although, this could’ve been due to the new Spotlight indexing feature in iOS 9.

Here’s the complete changelog for iOS 9.0.1:

If you’re already on iOS 9, then simply head to Settings>General>Software Update and install the 35MB update via OTA method.

If you’re stuck on the iOS 9 Slide to Upgrade screen, then downgrade to iOS 8.4.1 and connect your iOS device to iTunes.

iTunes should now notify of an iOS 9.0.1 update available for your device, click on Download and Update. If you have a slow internet connection, then: