Talk about one hectic day for the jailbreaking community. Not only did GeoHotz return to the jailbreaking scene with the bang, he gave the middle finger to the Dev-Team at the same time. There is a lot of controversy going around the web, about why GeoHotz has returned and why he released LimeRa1n when Chronic-Dev proposed an ETA on GreenPois0n.

Apparently GeoHotz wants to save the SHAtter exploit (as it is a better exploit than his), so him releasing LimeRa1n was meant to stop Chronic-Dev from releasing GreenPoison (or make them change their exploit). As Chronic-Dev now needs to implement GeoHotz exploit into GreenPois0n it could affect its ETA, but hey we have LimeRa1n….

Now before we begin the tutorial it is important to note that LimeRa1n is buggy, and unstable. Users who have used LimeRa1n have experienced a wide range of errors, so we recommend that you try this at your own risk. If you feel the need to, LimeRain supports the following iPhone, iPod Touch, iPad’s running the iOS 4 to iOS 4.1 firmware (iOS 3.2.2 for iPad).

If you have one of the iDevices listed you can jailbreak your iDevice, by following the tutorial below. Note: if you require an unlock DO NOT update to the iOS 4.1 firmware, you will need to wait for the PwnageTool to be released.

Step 1) The first thing you will need to do is download LimeRa1n to your desktop.

Step 2) Now make sure your iPhone, iPod Touch, iPad is running a stock firmware file (a firmware file that is not Beta). If you are running a stock firmware file, also ensure you do not need an unlock if you plan on jailbreaking iOS 4.1. Upgrading to the iOS 4.1 firmware will result in not being able to unlock your iPhone (possibly forever…you have been warned). If you have made it to here, the next thing you will need to do is Double Click on the LimeRa1n.exe icon to launch LimeRa1n.

Step 3) The next thing you will need to do is put your iDevice into DFU mode. To do so follow the instructions presented to you by LimeRa1n.

You will first need to press the Home and Power buttons together.

Then; once prompted by LimeRan, release the power button.

Once you release the power button, continue holding the home button until your iDevice enters DFU mode.

Step 5) Now you are near completing your jailbreak. The next thing you will need to do is grab your iDevice (once it reboots, of course) and load up the new icon on your homescreen called LimeRa1n. Once the LimeRa1n.app is up and running you will need to select Cydia and click the install button. As depicted to you below. 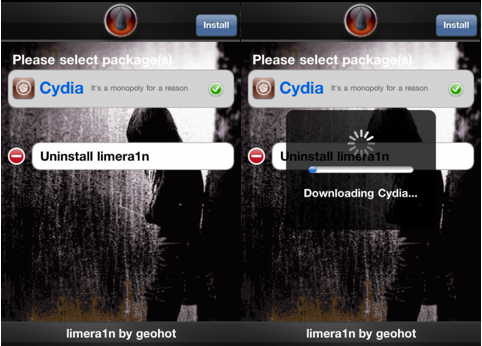