The GreenPois0n Jailbreaking tool was extremely popular during both the iOS 4 and iOS 5 firmware generations. Unlike other Jailbreaking tools created by the iPhone Dev-Team, like RedSn0w and The PwnageTool, GreenPois0n is maintained by a group of developers by the name of Chronic Dev. Some of the most well known members include @P0sixninja, @Pod2G, @Nikias, @AriX and @DHowett.

GreenPois0n is a one-click Jailbreaking solution that does not encompass some of the advanced features present in RedSn0w. GreenPois0n simply consists of one screen with a Jailbreak button. Once you click this button the Jailbreaking process will commence and after you put your device into DFU mode, you just sit back and watch your iPhone, iPod Touch, iPad or Apple TV become Jailbroken.

A one-click Jailbreaking solution is ideal for individuals who have never Jailbroken before and want to make the process as simple as possible. Jailbreaking tools like Sn0wBreeze or the PwnageTool provide additional features for customizing your Jailbreak, but often times are only used by individuals who are tech-savvy or have had past experience Jailbreaking. It’s not really that these tools are harder to use, but rather that the process takes longer.

Besides being a one-click Jailbreaking solution, GreenPois0n is also cross compatible with both Mac OS X and Windows. This means there is no segment to its userbase, and because of this fact it is an extremely popular Jailbreaking tool for older devices and firmwares. 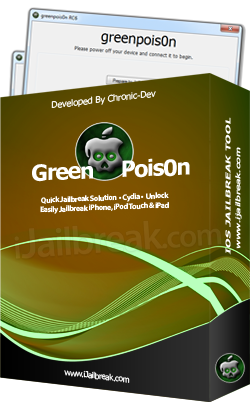 GreenPois0n is compatible with older generations of the iPhone, iPod Touch, iPad and even Apple TV, as well as various firmware versions dating back all the way to iOS 3. Unfortunately however, GreenPois0n has not been maintained past iOS 4.2.1/4.2.6 because it was replaced by the Absinthe Jailbreaking tool. If your iOS device is still running one of its supported firmwares however, it is a great tool to use.

The Basics Of GreenPois0n

Unlike Jailbreaking tools like RedSn0w that are consistently updated to support Jailbreaking new firmware versions tethered – a type of Jailbreak that means your iPhone, iPod Touch or iPad will not reboot without the aid of your computer if it loses power – GreenPois0n only supports Untethered Jailbreaks. This means your iOS Device will function as normal once Jailbroken and will not require the assistance of your computer to reboot.

How To Launch GreenPois0n Correctly

There is actually a specific way that GreenPois0n needs to be launched on both Windows and Mac OS X. If you are running GreenPois0n on Windows you will need to ensure you grant it administrative privileges by right clicking it and selecting the ‘run as administrator option’. On Mac OS X 10.8 Mountain Lion, because of the new Gatekeeper software, there is also a trick to running GreenPois0n. You will need to first hold down the control button and then select the ‘open’ option. 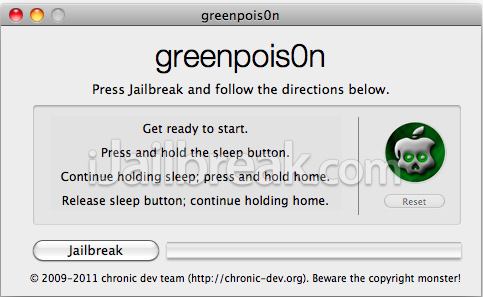 How To Jailbreak With GreenPois0n

GreenPois0n makes Jailbreaking extremely simple for even the most technologically illiterate person. Hopefully this in-depth analysis of GreenPois0n has come in handy. Keep in mind that GreenPois0n was replaced by Absinthe and for newer firmware versions/devices it is your go-to tool.