The LimeRa1n Jailbreaking tool was developed by George Hotz, otherwise known by the alias of Geohot. He is an American hacker known for first hardware unlocking the iPhone, developing numerous Jailbreaks for iOS and also hacking the PlayStation 3 (where he was later sued by Sony).

LimeRa1n was actually released by Hotz to stop the Chronic Dev-Team from releasing another Jailbreaking solution that would of Jailbroken the same firmware versions, but with another exploit called SHAtter. Hotz reasoning behind doing this was that SHAtter could be saved and used to Jailbreak the next-generation of Apple iOS devices that would contain a new bootloader (the iPad 2, iPhone 4S etc.). Unfortunately however, SHAtter ended up being patched by anyways; many people believe that the exploit was leaked to Apple.

LimeRa1n is a one-click Jailbreaking solution and does not encompass some of the advanced features of Jailbeaking tools such as RedSn0w. Once you click the Jailbreak button and enter DFU mode, the Jailbreaking process will commence and you just sit back and watch your iPhone, iPod Touch or iPad become Jailbroken. 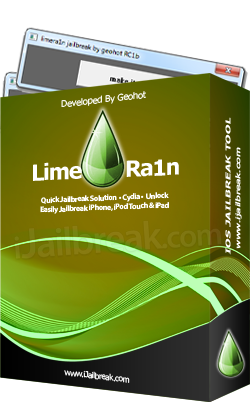 The Basics Of LimeRa1n

Unlike Jailbreaking tools like RedSn0w that are consistently updated to support Jailbreaking new firmware versions tethered – a type of Jailbreak that means your iPhone, iPod Touch or iPad will not reboot without the aid of your computer if it loses power – LimeRa1n only supports Untethered Jailbreaks. This means your iOS device will function as normal once Jailbroken and will not require the assistance of your computer to reboot.

How To Launch LimeRa1n Correctly

LimeRa1n needs to be launched a certain way on Mac OS X and Windows. If you are running LimeRa1n on Windows you will need to ensure you grant it administrative privileges by right clicking it and selecting the ‘run as administrator option’. On Mac OS X 10.8 Mountain Lion, because of the new Gatekeeper software, there is also a trick to running LimeRa1n. You will need to first hold down the control button and then select the ‘open’ option.

How To Jailbreak With LimeRa1n

LimeRa1n is a one-click Jailbreaking solution and as such you can probably figure out how to Jailbreak your iPhone, iPod Touch or iPad without a tutorial. iJailbreak has written numerous guides for Jailbreaking your iOS device with LimeRa1n however, that can be accessed from the How To Jailbreak Section. These guides include screenshots, and are specific to each firmware version LimeRa1n supports. As the Jailbreaking process with LimeRa1n is the same for all firmware versions however, you can follow the generalized guide below as well.

Jailbreaking with LimeRa1n is extremely simple! We hope you have found this in-depth analysis of LimeRa1n useful, and once again if you are experiencing errors or need an extra hand using LimeRa1n, please follow a guide through our How To Jailbreak section.