Only a few minutes ago we told you that Chronic Dev’s big announcement was an update on the iOS 5 Untethered Jailbreak. This big announcement from Chronic Dev appeared in the form of a blog post on GreenPois0n.com and talked about why an Untethered iOS 5 Jailbreak was never released. It turns out, it was because Apple had patched most of their exploits they had found. 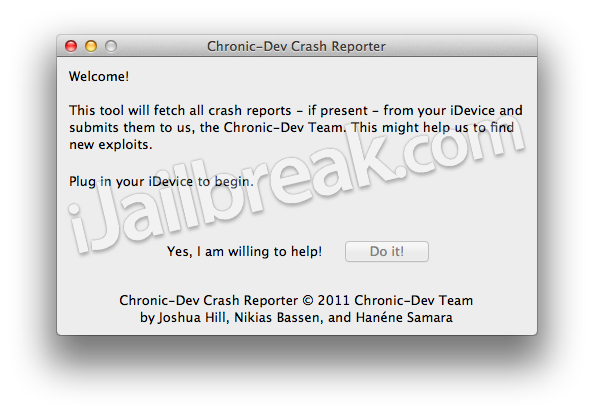 Note: At this time Chronic-Dev Crash Reporter is only for Mac OS X. A Windows version is coming within the next 24 hours.

We urge all of you to download Chronic-Dev Crash Reporter now. You will be greatly benefiting the Jailbreaking community by helping Chronic Dev find untethered iOS 5 exploits! Keep in mind that a How To guide for using the Chronic-Dev Crash Reporter tool will be published soon, so stay tuned. If you have any questions or thoughts please leave them in the comments section below.