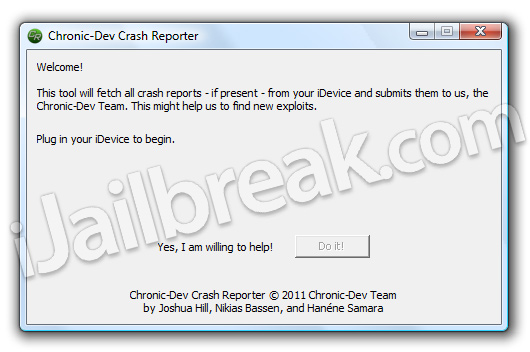 If you have a currently Jailbroken iPhone, iPod Touch or iPad then there should be no reason why you should not use this tool. It is extremely easy to use, and only requires you to click a single button! You can go ahead and download Chronic-Dev Crash Reporter for Windows by clicking on the download mirror below.

Note: It took me awhile to get Chronic-Dev Crash Reporter working on Windows. First of all, this is because certain Virus Protection programs (like AVG) detect this tool as a virus, when it is not. Second of all, Windows Firewall likes to block the uploading of these crash reports. Disabling these features for a short period of time may be necessary to use Chronic-Dev Crash Reporter on Windows.