Apple released the iOS 7.1 beta 1 firmware to developers a few days ago and although we recommended that you stay away from the firmware unless you were a developer, it was actually possible for non-developers to update to iOS 7.1 by simply finding the firmware file online and manually updating.

If for some reason you were one of these people who updated to any of the iOS 7.1 beta firmware then you will be glad to know it is possible to downgrade back to the latest iOS 7.0.x firmware. Which at the time of writing this guide is iOS 7.0.4. 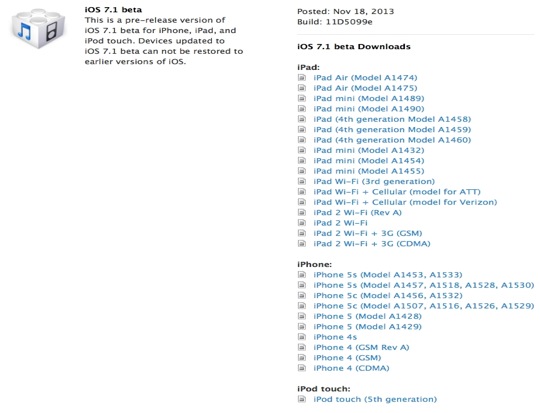 Those with any device running iOS 7.1 besides the iPhone 4, however, will only be able to downgrade back to 7.0.4.

So just how do you go about doing this?

iDoctorApple released a video showcasing the process, which is really only a normal manual restoration when it comes down to it. Thee isn’t really anything complicated about the process.

If you are struggling, however, here are the steps you should take:

Step 1) – Download the iOS 7.0.4 firmware from the iJailbreak Downloads Section.

Step 2) – Launch iTunes and plug your device into your computer via USB.

Step 3) – Put your device into DFU Mode, you can follow these instructions if you don’t know how. It isn’t hard though and only requires you to do the following:

After entering DFU mode your devices screen should be black and iTunes will tell you that your device needs to be restored.

Step 4) – Now just hold down the Alt/Option key on Mac or Shift key in Windows and click the Restore button. Then simply select the iOS 7.0.4 firmware and wait for the magic to happen!

It is worth noting that once the official iOS 7.1 firmware is released this method will not work because Apple will stop signing iOS 7.0.4.

Be sure to let us know how this worked for you in the comments section and if you had any troubles.