Recovery Mode – Is a mode that still runs off a state of iBoot which handles the standard restore or update process. This mode does not allow you to downgrade your iPhone, iPad, iPod Touch because iBoot is still running. With iBoot running you cannot restore a firmware lower than the version you are currently running. Recovery Mode also disallows you to restore custom firmware files unless it has been “pwned” prior to entering recovery mode.

Visual Appearance: Once in Recovery Mode your iPhone, iPad, iPod Touch will display a picture that tells you to plug your device into your computer. 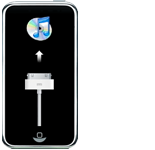 DFU Mode – Is a special mode that does not load the iBoot software or the OS (Operating System) and even though iBoot and the OS arn’t being loaded your iPhone, iPad, iPod Touch can still interface with iTunes. As this mode does not load iBoot or the OS this now enables you to downgrade your current firmware to a lower version. When you are in DFU Mode you can also restore custom firmware files because iBoot is not running to stop you.

Visual Appearance: Once in DFU Mode your iPhone, iPad, iPod Touch will display a blank black screen and because of this it is sometimes hard to tell the difference between whether or not your device is just powered off or in DFU Mode.

How To Put iPhone, iPad, iPod Touch Into DFU Mode

To get your iPhone, iPad, iPod Touch into DFU Mode you simply need to follow the instructions below. Sometimes getting into DFU Mode is tricky and it is all dependent on your timing and execution of the steps below. You need to execute the steps below perfectly and with correct timing. It may take a few attempts to get your device into DFU mode but don’t give up. Generally i havn’t had to try more than a couple times but sometimes it just takes practice.

Step 1) – Plug your iPhone, iPad, iPod Touch into your computer and launch iTunes. Stop any syncing with your device and then turn your device off by holding down the Power button and then sliding arrow button to the left.

Step 2) – Now that your iPhone, iPad, iPod Touch is off you need to Hold the Power and Home Button for exactly 10 seconds.

Step 3) – Once you Hold the Power and Home Button for 10 seconds release the Power Button and continue holding the Home Button for up to 30 seconds until iTunes comes up with a message saying iTunes has detected your iPhone, iPod Touch, iPad in Recovery Mode (Which is Actually DFU Mode).

DFU Mode as explained above can do many things that the normal recovery mode cannot do, because DFU Mode does not run iBoot. DFU Mode not only allows you to downgrade your firmware and restore using custom firmware files it is also helpful when trying to fix errors. Instead of going to the Contact page for help with these kind of errors, always try restoring your iPod Touch, iPad, iPhone in DFU Mode first. Below I will list some of the Errors that DFU Mode can help fix…

These Errors listed above can usually all be solved by placing your iOS device into DFU Mode and restoring it through iTunes.