There has already been numerous Cydia tweaks released for the iPhone 4S and Spire enabled devices to extend the functionality of Siri. Due to this fact I thought it would be a good idea to review the most popular Siri Cydia tweaks currently available. Thus, in this article from iJailbreak.com you will learn about some of the most popular Siri tweaks currently available in Cydia. 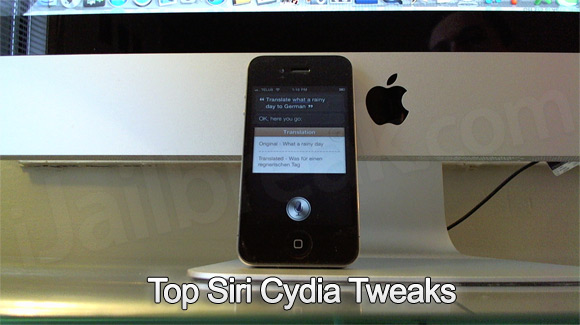 The Sireet Cydia tweak will allow you to tweet directly from Siri. My only gripe with this Cydia tweak is that there is no confirm to send option. The reason I think there should be such an option is due to the fact that occasionally Siri mispronounces words. Thus, it would be nice if I noticed an error I could stop Siri from tweeting that specific tweet and allow me to I re-say my tweet.

In this article we ended up listing almost all of the available Siri Cydia tweaks, but at this time, because there are not many Siri Cydia tweaks available, we thought it would be worth your while to look through them. Did we miss any? Do you have any thoughts you would like to share? Let us know in the comments section below…