The Jailbreaking tool that allows users to Jailbreak their iPhone, iPod Touch or iPad Untethered on the iOS 6.1.3 to 6.1.5 firmware has just been updated to version 1.0.5. In this version of P0sixpwn comes fixes for some issues users have been experiencing like Cydia not appearing after the Jailbreak and various crashes. On the Mac version of P0sixpwn there is also Snow Leopard support. 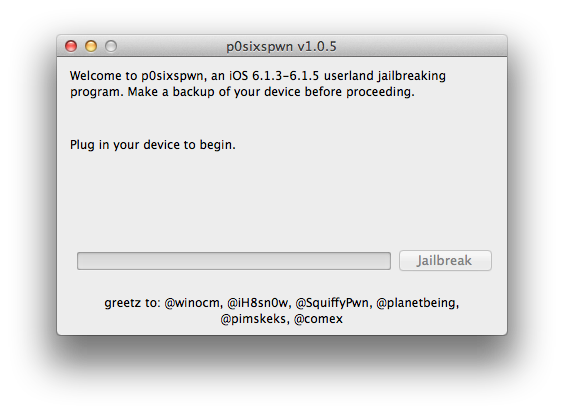 If you haven’t yet Jailbroken with P0sixpwn be sure to check out our official how to guide.

You can download P0sixpwn v1.0.5 for both Mac OS X and Windows from the iJailbreak Downloads Section or from the direct links shown below.

The evasi0n7 jb could have been released at 7.1. They released it prematurely because of geohot going to push it first. geohot was only going to push it because of the deal with the chinese that was going on with evad3rs. Point is, they only released it prematurely because they were at risk of not getting the $$$ between the deal they setup with taig. If they truly did care about the users, they would have waited till 7.1. OR EVEN USE THE MOBILEBACKUP2 SYMLINK VULN AND NOT TWO EXTRA ONES. Now they’re being hypocrites by saying we burned something that could have been kept?

What do you make of this all? Drop us a line in the comments section below.