Those of you who haven’t updated to iOS 7 yet or cannot update to iOS 7 due to incompatibility will be glad to know that it is now possible to Jailbreak iOS 6.1.3 and 6.1.5. iH8Sn0w and Winocm have finally released their Jailbreak which was teased a couple of days ago in the form of a Cydia package called P0sixspwn.

As the Jailbreak has been released in the form of a Cydia package you will need to first Jailbreak your A4 iPhone or iPod Touch using RedSn0w or Sn0wbreeze. Then all you will have to do is boot tethered, launch Cydia and install P0sixspwn. 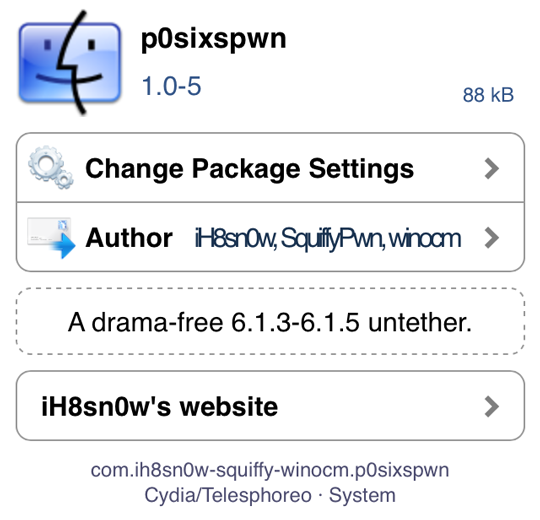 Unlike the Evasi0n7 Jailbreak, which has been plagued with drama since its release, both iH8Sn0w and Winocm claim their Jailbreak is drama free and have promised to release a version compatible with A5 devices shortly. As of right now, however, P0sixspwn is only compatible with A4 devices (iPhone 3Gs, iPhone 4 and iPod Touch 4th generation) running iOS 6.1.3 or 6.1.5.

Step 1) – Jailbreak your iPhone or iPod Touch tethered with RedSn0w or Sn0wbreeze (search our site for tutorials if need be).

Step 2) – Open Cydia on your now Jailbroken device, go into the Changes tab and tap the Refresh button in the top left hand corner.

Step 3) – Now search for P0sixspwn and install it.

Note: If you cannot find P0sixspwn it is because Cydia is currently under a lot of strain, so consider trying again later.

iH8Sn0w also mentioned that he would release a version for iOS 6.1.3 and 6.1.4 for A5 devices and newer, possibly around Christmas day. So we will keep you posted.