Two of the biggest problems people are having with Cydia tweaks right now are them not working whatsoever or not showing their preferences in the Settings app. Both of these issues are caused by an incompatibility with Mobile Substrate and PreferenceLoader running on iOS 7.

You can actually fix the issue manually by reinstalling both MobileSubstrate and PreferenceLoader after you install a tweak, but you will have to repeat this process for every tweak you install and this can become tedious.

There is actually a solution to Cydia tweaks not working on Jailbroken devices running iOS 7 though and it’s called BootStrap. In non-technical terms the BootStrap Cydia tweak makes MobileSubstrate and PreferenceLoader play nice together. With it installed you should never run into an issue of a Cydia tweak labeled as compatible with iOS 7 not working on your device. 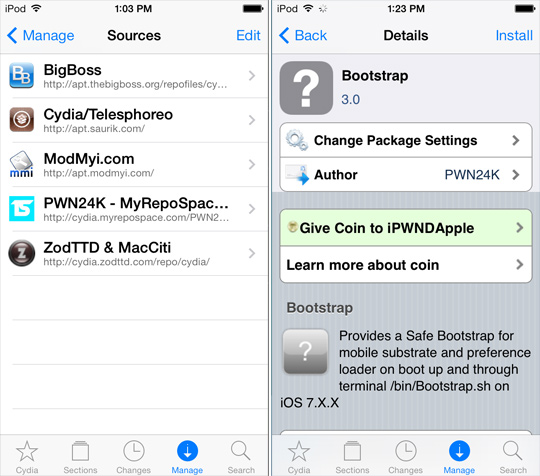 The only exception to this being 64-bit devices with an A7 chip like the iPhone 5s. Here’s why.

So how do you install BootStrap?

You will have to add PWN24K’s repo to your device. To do this:

With BootStrap installed you should no longer run into issues.

This is IMPORTANT though so keep on reading. Once MobileSubstrate and PreferenceLoader are updated for support with iOS 7 you MUST REMOVE BootStrap before updating otherwise you will run into issues.

With that said enjoy being able to install Cydia tweaks on your Jailbroken iOS 7 device.

Update: Of course after publishing this article the repo owner took the package down for some maintenance. It was noted here that it will be up shortly though, so Refresh your sources in about an hour and you should see it. Here is an alternative repo if you can’t wait, but I would personally install it from the official source: http://cydia.myrepospace.com/iPWNDApple