This morning the Evad3rs did something that caught us all way off guard. They released the Untethered Jailbreak for iOS 7. The tool used to Jailbreak iOS 7 Untethered is called Evasi0n7 (official website) and is compatible with all iPhone, iPod Touch, iPad and iPad Mini models running iOS 7.0 through 7.0.4. 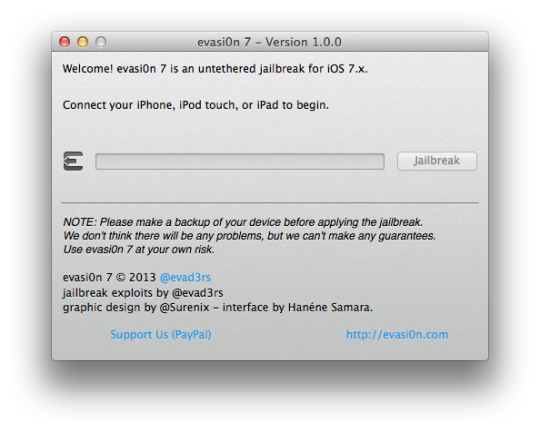 If you are currently running any variation of iOS 6 so that you could maintain your Jailbreak you are now safe to update to iOS 7. With this said, however, you may want to hold off due to the amount of bugs currently associated with the Jailbreak.

These aren’t any ordinary bugs you usually expect with a Jailbreak release either, the Evad3rs didn’t notify any Jailbreak developers, including the creator of Cydia, that they were releasing their Untethered iOS 7 Jailbreak this weekend so hardly anything is compatible.

If you manage to install Cydia on your home screen, relax and wait for packages to be updated or you’ll find yourself in boot loops.

*Every* tweak does use Mobile Substrate. Stay away from the jailbreak for a bit until a fix/update is available.

Do not jailbreak your device if it has been OTA-updated. Do not install anything from Cydia if you’ve just jailbroken. Wait for the update!

The bottom line is make sure you backup your device before attempting to Jailbreak with early builds of Evasi0n7 because the chances of something going wrong are high. Pod2G did state over Twitter, however, “we are working heavily on fixing first issues with the initial release of the jailbreak. We have and we’ll update the FAQ on the website.” As such you can expect things to correct themselves shortly.

With all of that said you can download Evasi0n7 from the iJailbreak Downloads Section or from the direct links shown below.

You can follow our official How To guide for Jailbreaking with Evasi0n7 on Mac OS X and Windows here.