The Nexus 7 provides a lot of tablet for $199, but you might be wondering how to stretch that powerhouse of a budget tablet even further. Our favorite tweak is to switch out Android for Ubuntu. While Android isn’t a bad operating system by any stretch of the imagination, installing Ubuntu on the Nexus 7 will transform your tablet into a capable ‘desktop’ computer (complete with desktop versions of FireFox, LibreOffice, and the GIMP image editor). The Nexus 7 isn’t the first Android device we’ve seen running Ubuntu Linux, but it might be a saner option than installing Ubuntu on, say, a Samsung Galaxy S III phone.

The best thing about installing Ubuntu on the Nexus 7 is it’s extremely easy to do if you already have Ubuntu 12.04 LTS or later installed on your computer with ADB set up–though if you don’t already have ADB set up on your Linux desktop the prep work can throw users new to Linux for a loop. Here’s the rundown of what you need, adapted from Ubuntu’s official Wiki, with some details added in to fill in the gaps for new modders.

1. The first thing you’ll want to do is install ADB drivers along with Fastboot to your Ubuntu desktop if you haven’t already  You can find the package by searching for “android-tools” in Ubuntu Software Center.

2. Next, if you haven’t already done so, you’ll have to set your Ubuntu desktop up so that it has permission to ‘talk’ to your tablet.
Enter the following command to a terminal window:

3. Open the file “51-android.rules” with a text editor on ubuntu.

4. Replace the name of the OWNER with your username, the one that you use to log into Ubuntu. When you’re done, save over the file.

You will also need to enable USB Debugging on your Nexus 7 tablet, which you can do through settings -> applications -> development.

1. Reboot the Nexus 7 to the Android bootloader by holding volume down + power until you see the bootloader screen.

2. Connect the Nexus 7 to your Ubuntu desktop with the micro-usb cable. Your tablet should look like the picture below: 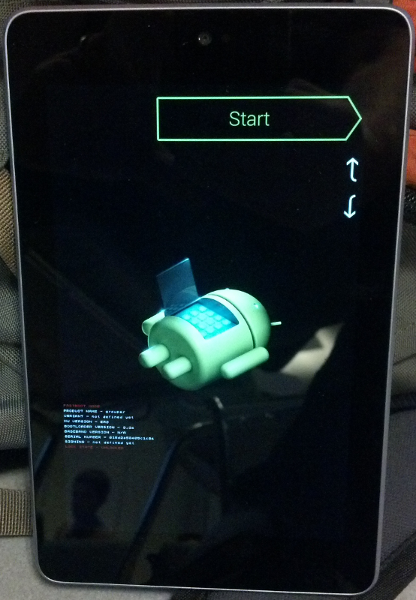 3. To ensure fastboot sees your device, open a terminal window and type:

$ sudo fastboot devices
It should return a serial number alongside the word fastboot.

5. At this point, instructions should appear on the Nexus 7’s screen to unlock the bootloader. Restart your tablet to complete the process.

Step 3: Install Ubuntu on the Nexus 7

Now that the prerequisites have been taken care of, actually installing Ubuntu to the Nexus 7 is a snap.

1. Download the installer PPA to your desktop by entering the following commands:

2. Search for the Ubuntu Nexus7 Installer in Ubuntu’s Dash search engine. Click on the Installer. 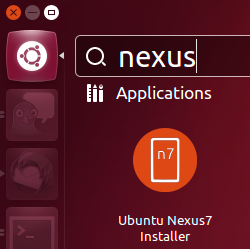 3. The installer should load with a graphical interface which will install the latest version of Ubuntu on your tablet. The process should take 2 minutes. Afterwards your device will reboot and finish the installation, which should take about 10-15 minutes.

You should now have Ubuntu running on your Nexus 7.

Do you prefer using Ubuntu or Android on your tablet? Share your thoughts in the comments section below.