With the release of iOS 7.1 yesterday came the end of “Jailbreaking Season.” Meaning of course that you can no longer restore your iPhone, iPod Touch or iPad running a Jailbreakable firmware version, instead you’re forced to upgrade to iOS 7.1 which is unable to be Jailbroken because Apple patched too many vulnerabilities used by Evasi0n7. 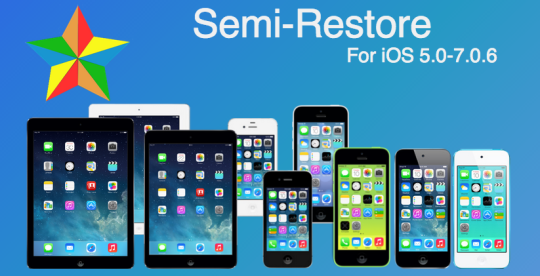 This means if you get stuck in reboot loops or experience any kind of other errors where you would like to do a clean restore back to iOS 7.0 to iOS 7.0.6 (while maintaing your Jailbreak) then you will be glad to know it is possible with SemiRestore7. Technically SemiRestore doesn’t perform a fully fledged restore on your device, but it is the closest you will get without restoring to iOS 7.1.

In order for SemiRestore7 to work, however, OpenSSH is required to be installed on your Jailbroken device. So you should install this right away so that you can take advantage of SemiRestore7 if you ever need to. Be sure to also change your root password when you do so.

You can download SemiRestore right now for Windows (supports Windows XP SP3 or higher). The Mac and Linux versions are currently being beta tested, and should hopefully be released soon.