In the middle of May we told you about a tool called Semi-Restore that was being developed by the folks over at CoolStar that would allow anyone to partially restore their iPhone, iPod Touch or iPad back to the firmware version it was currently running. This applies to even those who haven’t saved their SHSH blobs.

Keep in mind that this isn’t a fully fledged restore that would happen if you hit the restore button through iTunes, but it is as close as you are going to get with being able to start fresh from the firmware version you are currently running.

Apple limits the ability to restore to just any firmware version. By default if you wanted to restore your iPhone, iPod Touch or iPad you would have to restore to the latest firmware version, which at the time of writing this article is iOS 6.1.3/6.1.4. For Jailbreakers that means if their device is running sluggish there is not much they can do because they cannot restore otherwise they will lose their ability to Jailbreak.

Thanks to Semi-Restore, however, devices running iOS 5.0 to 6.1.2 are able to partially restore back to the firmware version they are currently running. Despite a lot of people doubting that a final release of Semi-Restore would happen, today both the Windows, OS X and SSH version is available to download. 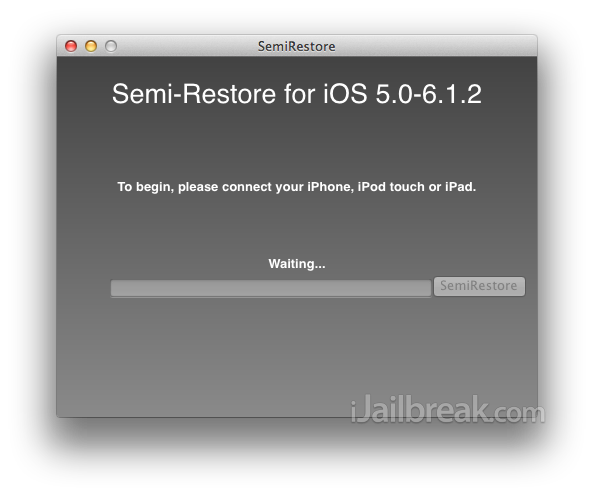 The entire process of restoring your device with Semi-Restore is extremely simple. You just launch the application, connect your device through USB and press the SemiRestore button. Before you go about downloading the tool though, be sure to read the following:

Without further adieu you can download Semi-Restore from the iJailbreak Downloads Section by clicking here. We will have an actual how to guide available shortly, but until that time share your results in the comments section below.