iJailbreak published an article on New Years eve about Cysource, an ambitious new Cydia repository which currently includes a speedy 24-hour wait for tweaks to be uploaded, support for user comments, and a total lack of advertisement. As someone who is sick of seeing borderline pornographic we were excited to hear about another ad-free repository, though Cydia’s original developer–Saurik, AKA Jay Freeman–weighed in with a comment.

Here is Saurik’s statement on Cysource and advertising on Cydia in its entirety:

“MacCiti, one of the default repositories, is also ad-free (although they share servers with ZodTTD, which is not, so you have to pay attention to the branding); reading this article would makes it sound like all repositories, or even just all default repositories, are ad-laden, when that isn’t the case. MacCiti also happens to have a very fast turn-around time on packages (something they can do as they specialize in themes; BigBoss, in comparison, specializes more in Tweaks, and it takes them a while to proof the packages and test these kinds of products).

As for CySource, they were distributing copyrighted content earlier today (a Nintendo ROM, one of Apple’s stock apps, and Action Menu: a package from Ryan Petrich rebranded as from CySource that they were not authorized to distribute) and ended up with a repository warning (since removed, as they removed these packages after various people in the developer community–including myself and Ryan–sent them complaints).”

In the interest of science, let’s put Saurik’s comments to the test. The default repositories on Cydia include BigBoss, Cydia/Telephoreo, Dev Team, ModMyi, and ZodTTD & MacCiti. Do pages hosted on these repositories distribute intrusive ads? 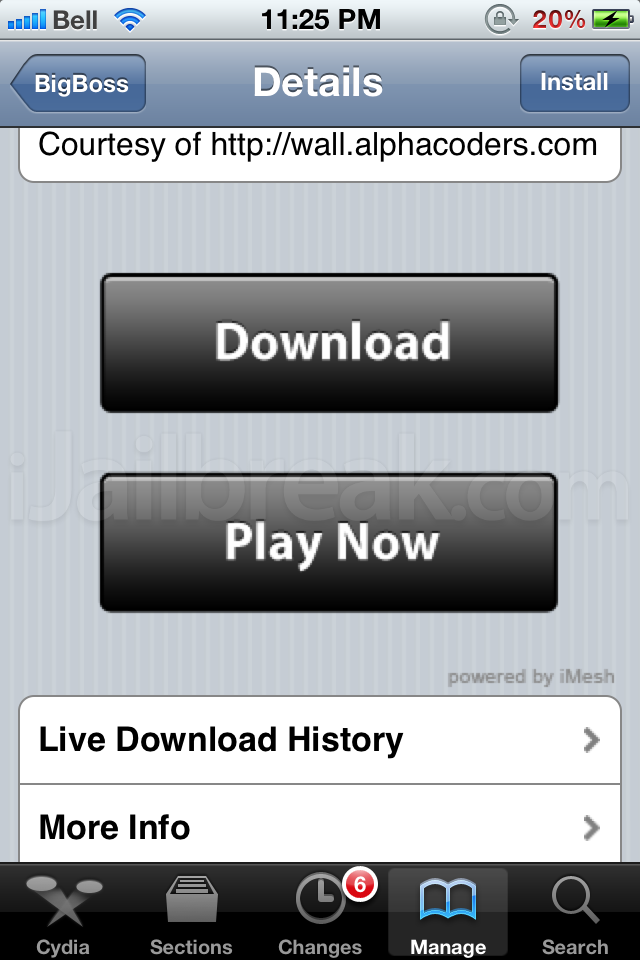 From the bigboss repository: I wonder how many first-time jailbreakers are fooled by these ads?

At first I thought the BigBoss repository would be the worst offender on the list. The BigBoss repository currently features two large square ads that immediately obstructs the user’s view of the tweak descriptions, and includes another smaller banner ad at the top of the page. These ads often feature fake user interface buttons or sexualized content, which may make the repository particularly unsuitable for younger jailbreakers. 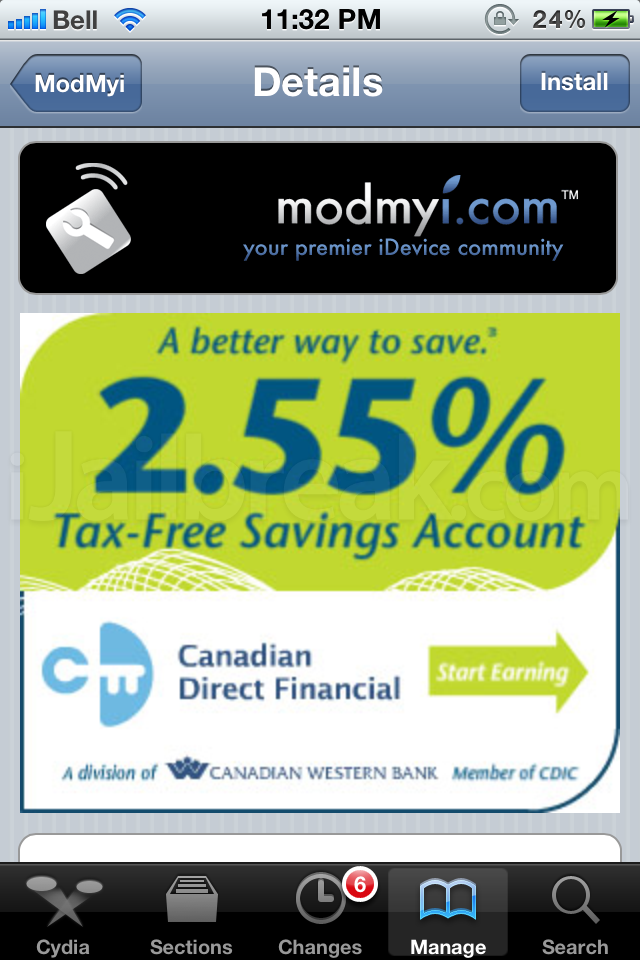 ModMyi‘s ads aren’t as shady, at least on my phone.

ModMyi‘s repository does include advertising in the same big square format as the BigBoss repository, in addition to a ModMyi-branded banner, but the ads that appear from ModMyi are unmistakably ads. (I can’t remember being annoyed by them on principle.) The current ads seem to be from a local financial institution, but since I can’t see the URL from Cydia’s built-in browser, I’m going to hold off on purchasing a new tax-free savings account. 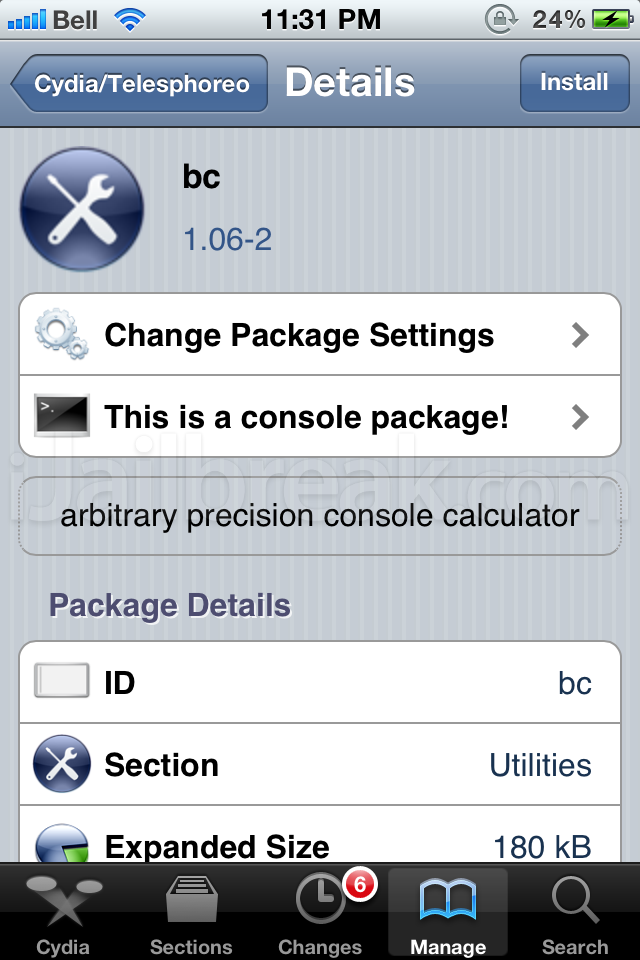 Saurik’s own Cydia/Telephoreo repository is squeaky clean, as is the Dev Team’s repository (which currently only hosts UltraSn0w). That said, Saurik does make some money off of Cydia Store purchases, so it’s not like he’s operating entirely without a revenue model. 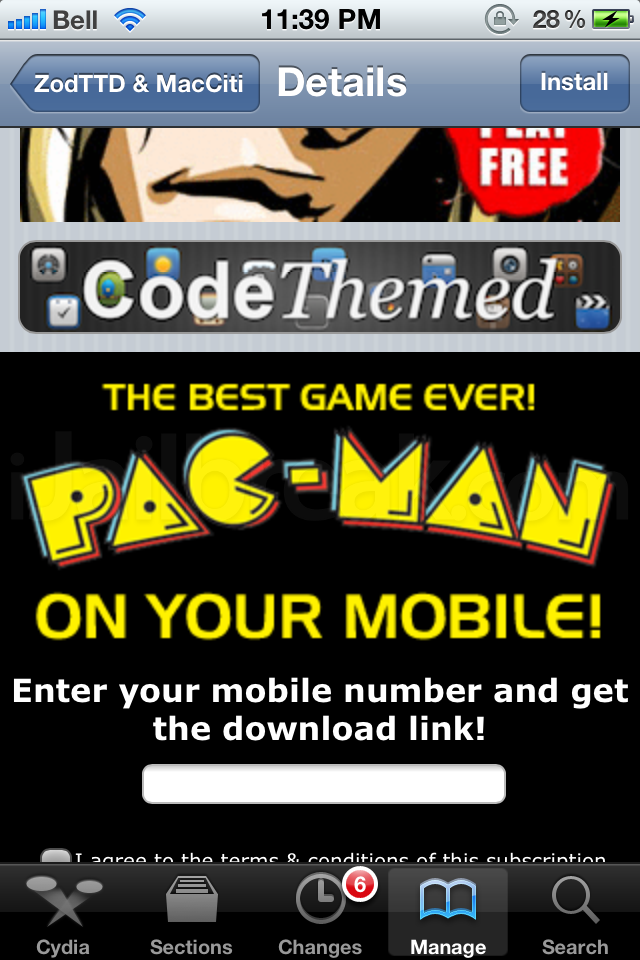 I don’t think it’s fair to say the MacCiti server is ad-free, since it shares a repo with the ZodTTD‘s server. While ZodTTD’s server contains some of my favorite apps, the repo pages feature aggressive advertising itself–currently 5 ads per page. (One of which is asking me to enter my mobile phone number to buy Pac-Man for $25 a month?) There’s no way to differentiate between the two servers on Cydia until you’ve opened a page, so the lack of advertising on MacCiti’s a moot point.

On the other hand, the servers that employ aggressive advertising are also the servers that host public submissions for wallpapers, apps, and tweaks. According to Saurik and the hosting repositories themselves, these repos vet the packages for malware; which means these sites are providing a service in addition to raw bandwidth cost. How long can such a service operate without a commercial model?

Do you think the Cydia repositories need to be ad-free? Do you think other factors are more important? Share your thoughts in the comments section below.