We’ve talked about a lot of Siri related jailbreak tweaks on iJailbreak and here’s another one to add to that list. After the release of the iPhone 4S jailbreak, many developers have given us some amazing Cydia tweaks to customize Siri and other aspects of the iDevice.

With the help of such Cydia tweaks, one can perform tasks that wouldn’t be possible on a non-jailbroken iPhone 4S. This new Cydia tweak, called SiriLoveLyrics is for those who like to get the lyrics of what they’re listening to instantly. This tweak enables Siri to instantly fetch the lyrics of songs from the Internet.

There are two ways to get the lyrics of a song, first, you can say “Search for lyrics: [Song Name] by [Artist Name]” and get the lyrics. The second way is to just say “Show Text” or “Show Lyrics” while you’re listening to a song on the iPod.app. 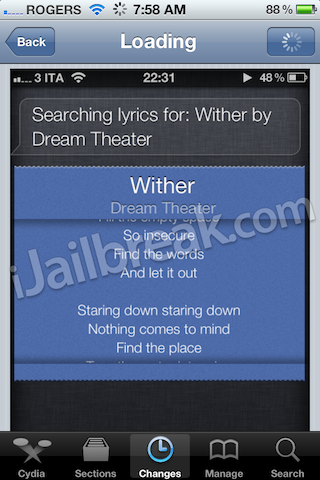 You can download SiriLoveLyrics from the ModMyi repo in Cydia for free. You will need to have AssistantExtensions Cydia tweak installed in order to get this working.