With a recent update of the MyAssistant Cydia tweak being released bringing MyAssistant to version 1.1.1 you can now do even more with Siri! In this new update comes the ability to open any app with Siri by saying launch and then the apps name. You can send a tweet by simply speaking tweet and you can even dismiss Siri with a command of your choice. MyAssistant 1.1.1 also comes with numerous bug fixes and overall makes things more stable. 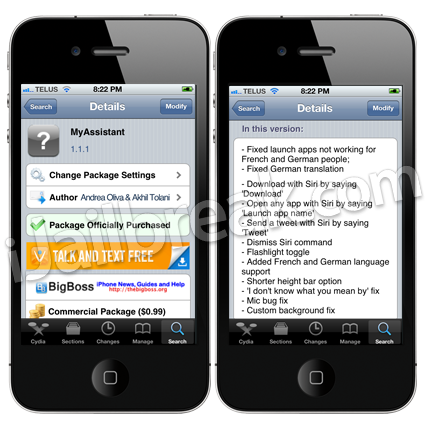 You can take a look at the complete changelog for MyAssistant 1.1.1 in the quoted area below.

For those of you who are thinking about purchasing MyAssistant you can find it through Cydia in the BigBoss repo for a price of $0.99. Of course if you have already purchased MyAssistant you can find this update free through Cydia in the changes tab upon refreshing your sources. Don’t forget to let us know what you think of this tweak in the comments section.