Have you successfully jailbroken your iPhone, iPod Touch or iPad on iOS 9 – 9.0.2? Well, it’s now time to try out some new tweaks from Cydia. If you’re not sure what tweaks are compatible with iOS 9, check out this list. Most tweaks are now compatible with the iOS 9 jailbreak, but there are several other tweaks hidden away in third-party repositories.

Cydia comes with only a bunch of sources/repos and the main ones are BigBoss and ModMyi. However, there are a few other sources/repos that host some pretty cool tweaks and beta versions. You should definitely add these repos to Cydia and check out the tweaks they have to offer.

Adding a new repository on Cydia is easy. Simply head over to the Sources tab in Cydia, tap on Edit and then select Add. Now type in the source address and click on Add Source. 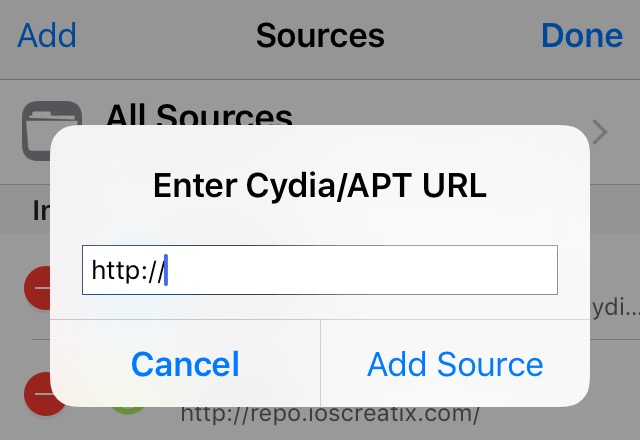 That’s about it. Wait for Cydia to download the packages from the new repo and reload. Now, what sources or repos should you add? Find out below.

Here are the Best Cydia Repos for iOS 9

The official repo for the very popular Flu.x tweak. This tweak adjusts the brightness and color of your devices’ display according to the time of day. A very useful tweak. It is currently in beta for iOS 9 and is only available through the repo. To add this repo, type in the following URL when adding a source: https://justgetflux.com/cydia/

Ryan Petrich is a popular name in the jailbreak community. One of his most popular tweak is Activator. He has developed several other tweaks for Cydia and they can all be downloaded from his personal repository. You’ll also gain access to the latest betas for tweaks. Another great repository to add to Cydia’s sources. Here’s the address: http://rpetri.ch/repo

Another great repo to add to your list of sources in Cydia. This repo is home to several nice tweaks such as SafariSaver, AppSync Unified and many more. The address is: https://cydia.angelxwind.net/

This repository includes a tweak called Hapticle, which gives you Apple’s Taptic Engine haptic feedback on a device that doesn’t have a Taptic Engine. It isn’t as good as Apple’s hardware counterpart obviously, but it is something cool to have. You’ll also find several other useful tweaks on this repo. Try it out: repo.fortysixandtwo.com

If you’re an iOS power user and like to play around with command line tools etc, then you’re going to want to add this repo to your Cydia sources. This repo consists of several advanced tools and packages. Address: https://repo.coolstar.org/

Some other sources to try:

There you go. Some of the best third-part repositories to add to your Cydia sources. Try out the tweaks and let us know what other repositories do you follow.