Turns out Pod2g’s passions aren’t only hacking and security research–Pod2g, also known as Cyril Cattiaux, has been developing a program for the iTunes App Store with the help of designer Thientam Bach, which was just revealed as “podDJ.” The app is billed as “the most realistic virtual turntable you have ever seen:” on the iPad. So far Pod2g has posted a video of the app on YouTube and on podDJ’s official website.

Video demo of podDJ, which demonstrates how to achieve crab scratch effects with the software.

What does podDJ have going for it? There’s direct iTunes library access, so you can get to your music without wasting valuable space on your tablet, full multitouch support, multitasking, multi-route audio, and support for streaming your music to airplay-compatible speakers. The interface is beautifully designed and mimics a traditional 2-turntable setup.

As you might expect from a hacker-DJ, the official page for podDJ is heavy on specs. The sound output latency is 5 milliseconds–about the time it takes for a honey bee to flaps its wing once mid-flight. The OpenGL refresh rate is 60 Hz, which means that you’re seeing updates on screen as fast as the iPad’s screen will allow. There’s mention of zero latency for cue buttons and key lock, as well as use of the realtime DIRAC 3 sound filter, for on-the-fly speed and pitch shifting. This is shaping up to be a high-performance DJ app for what’s generally considered to be a casual device. 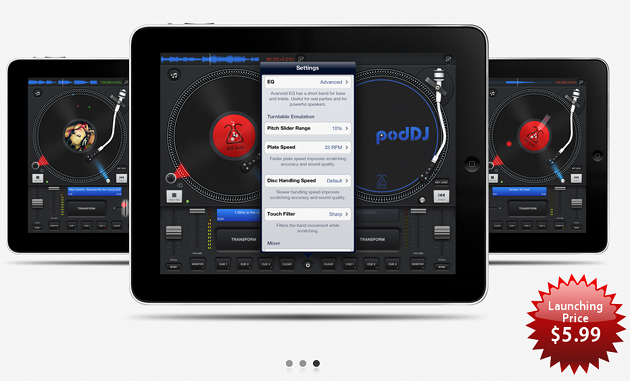 For a $5.99 app, podDJ looks great, and we look forward to playing with it.

If touchscreens aren’t your thing, the app comes with support for the Numark iDJ Live hardware–and also stereo splitting cables and soundcards, allowing DJs to monitor their tracks before playing them. podDJ is designed to work with any iPad running iOS 6, including the iPad Mini.

Would you DJ with an iPad, or would you prefer to use laptop, or dedicated analog hardware? Share your thoughts in the comments section below?

UPDATE #1: podDJ is now available to download in the iTunes App Store. Direct link below: