It is a known fact that you can Jailbreak the iOS 6 beta 1 firmware, but unfortunately because iOS 6 is a new firmware generation it has broken a lot of things including Cydia. That is why when you currently Jailbreak the iOS 6 beta 1 firmware with RedSn0w you only get SSH and afc2 support. What this allows you to do however, is access your iOS device’s filesystem (gain root access). 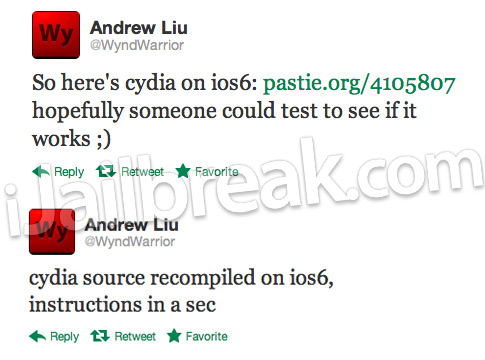 If you have been missing Cydia running the iOS 6 beta 1 firmware then you will be glad to know @WyndWarrior, otherwise known as Andrew Liu has recently tweeted he has recompiled Cydia for the iOS 6 firmware generation. Additionally, he has also provided instructions for users to install this recompiled version of Cydia on their iPhone, iPod Touch or iPad running iOS 6 beta 1. As such in this guide you will learn how to install Cydia on your device running the iOS 6 beta 1 firmware.

How To Install Cydia iOS 6 Beta 1

Step 2) – Once Jailbroken you will need to find an SSH client for your Windows or Mac OS X computer and connect to your device. Examples of these clients range from Coda for Mac OS X or Putty for Windows. Another popular SSH client that is cross compatible with Windows and Mac OS X is Cyberduck.

Note: The SSH username is “root”, SSH password is “alpine” and the server is your devices’s IP address (found by going into Settings > Wi-Fi > Connected Network Name > IP Address).

Step 3) – Once you are connected to your device through SSH you will need to copy and paste the following via SSH command line.

Step 4) – After the above SSH command is carried out Cydia should start installing and your device should respring with the Cydia icon appearing on your SpringBoard (homescreen). If you do not see Cydia on your SpringBoard then you will want to reboot and boot tethered using RedSn0w 0.9.13dev1.

Step 5) – Tap the Cydia icon on your SpringBoard and wait for it to finish preparing its filesystem. Congratulations! You now have Cydia installed on your iPhone, iPod Touch or iPad running the iOS 6 beta 1 firmware.

Keep in mind that even though you have Cydia installed on your device running iOS 6 beta 1, a majority of Cydia tweaks will not work. This is because they need to be updated for iOS 6 compatibility. With this in mind, let us know what Cydia tweaks are compatible with iOS 6 beta 1 in the comments section below.