Tim Cook, the CEO of Apple, shared today in an article he pinned for Bloomberg, that he is gay and he’s proud to be gay. This is a very powerful message, coming from a very powerful person. The article is well written and in it Tim Cook explains why he came out of the closet. 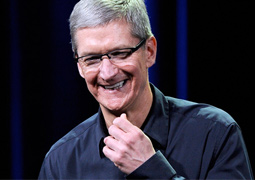 Not a lot of people who are in his position would come out publicly, but what Tim Cook has done is huge! He has been very private about his personal life before this and honestly, it shouldn’t matter if he’s gay. Apple has been doing very well in his hands, we’ve had some great products under his leadership and his sexual orientation should be of least interest to anyone. His colleagues at Apple knew and have given him all the support.

For years, I’ve been open with many people about my sexual orientation. Plenty of colleagues at Apple know I’m gay, and it doesn’t seem to make a difference in the way they treat me. Of course, I’ve had the good fortune to work at a company that loves creativity and innovation and knows it can only flourish when you embrace people’s differences. Not everyone is so lucky.

While I have never denied my sexuality, I haven’t publicly acknowledged it either, until now. So let me be clear: I’m proud to be gay, and I consider being gay among the greatest gifts God has given me.

By admitting openly of his sexual orientation, he hopes that people who are unsure of themselves will come out of the closet.

Being gay has given me a deeper understanding of what it means to be in the minority and provided a window into the challenges that people in other minority groups deal with every day. It’s made me more empathetic, which has led to a richer life. It’s been tough and uncomfortable at times, but it has given me the confidence to be myself, to follow my own path, and to rise above adversity and bigotry. It’s also given me the skin of a rhinoceros, which comes in handy when you’re the CEO of Apple.

The article is a joy to read, so go check it out for yourself. What do you think of this? Isn’t this a powerful message to the world? Let us know in the comments.