If you didn’t have to jailbreak your phone to apply tweaks and UI mods, well, I’d be out of a job. Aside from that one contingency, jailbreakers are clamoring for a more ‘open’ iOS from Apple–one that will allow for developers to sell tweaks–as third-party jailbreaks have yet to materialize.

The trend was started by the hacker previously behind the Absinthe jailbreak, Pod2g: “If you agree that iOS needs more openness, why don’t we make #weWantAnOpenIOS trend on twitter! That would be our answer to Apple.” 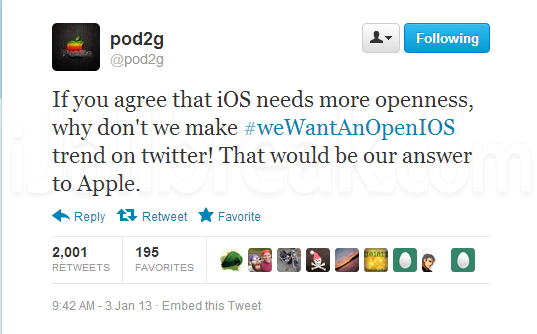 There were a couple possibilities of what this more ‘open’ iOS could mean, and users on Twitter could be confused as to what it stands for. The more dramatic possibilities, such as Apple releasing the source code to iOS (making the software ‘open source’) or allowing for developers to freely distribute programs outside the App Store (opening the distribution on the platform), are also the most blasphemous to Apple’s practice of control and vertical integration. The day a Twitter campaign wrests control of iOS from Apple will be the day I eat a genius shirt.

The more likely possibility was explained by Pod2g in a later tweet. “I never talked about “unsigned code” nor “open source”. They can allow tweaks by extending the SDK. #weWantAnOpenIOS”. The idea is Apple could create more tools for developers to make tweaks, similar to what we’ve seen on Cydia. While this might not sit neatly with Apple’s brand of simplicity–delivering uncomplicated products that ‘just work’, it might not be a proposal that would get someone laughed out of a conference with Tim Cook.

After all, there weren’t any third-party applications on iOS until the early jailbreakers wrote them–you might remember Apple suggesting everyone use clumsy web apps instead. Apple opened their API to allow for developers to submit sandboxed programs, so it’s possible that Apple could open their API again. I’m not exactly betting on this possibility, but smart jailbreakers notice that features developed by the community have a tendency to find their way onto mainstream iOS, in one way or another. 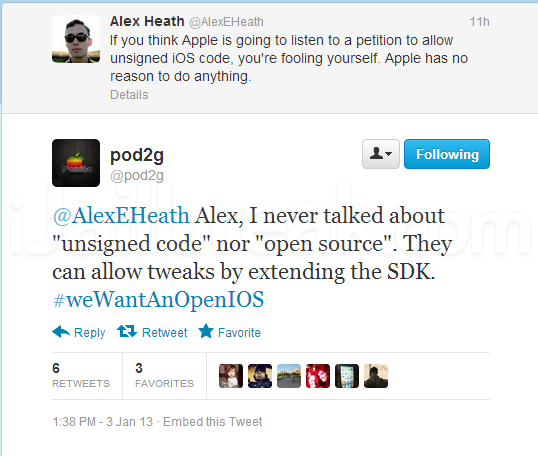 Pod2g clarifies what could be a confusing term.

How much would Apple have to provide to make jailbreaking obsolete for you? Share your thoughts in the comments section below.