Ever heard the expression curiosity killed the jailbreak? Well, how about curiosity killed the cat? Today the man who started the ball rolling for the iPad 2 untethered Jailbreak (JailbreakMe 3.0) leak explains the story behind the whole ordeal; the events leading up to the leak and who actually leaked the jailbreak to the world. If you are interested in reading the full story you can visit the website. However, we are going to provide a condensed version below:

On June 27th an individual (we won’t mention any names) let curiosity get the better of him. After searching around different directories on a site that Comex owned (www.qoid.us), he came across an interesting folder. The folder was named saffron which grabbed his attention mainly because jbme 2.0 was star. After going into the directory the individual noticed a bunch of PDF files named after different iOS iDevices. Which he immediately knew was the new Userland Jailbreak Comex had been working on the almost the past year.

After discovering something millions of people were desperately waiting for. The individual copied the files and re-uploaded them to his personal server to show off to his friends. Additional he went into a few internet forums and started letting people know about his discovery. Naturally, however, no one in the forums believed him as he wasn’t providing proof. Thus to defend himself he sent one of the individuals the PDF file to try on his iPad 2; and what would you know it worked.

While the individual swore he would not share the file, the next morning Comex’s iPad 2 Untethered Jailbreak was all over the internet.

The individual who stumbled upon these files blames curiosity and states that he is only at fault for 10% of the situation. While he was not directly responsible for the leak, uploading the files to his server was the biggest mistake he made. Once something is on the internet, anyone can access it. This is something a lot of people fail to understand.

The unfortunate thing about the situation is now Apple can reverse engineer the exploit and patch it in a simple iOS update (iOS 4.3.4); possibly before Comex can even fully release JailbreakMe 3.0.

Staying positive, however, today is FunDay and maybe… just maybe Comex will manage to finish Jailbreakme 3.0. I know for one I have my fingers crossed.

How To Jailbreak iPad 2 Untethered On iOS 4.3.3 [Unofficial Version]

It should be no surprise that the iPad 2 untethered jailbreak was leaked. We even provided a tutorial on how to Jailbreak your iPad 2 Untethered if you could get your hands on the leaked PDF files. Once word got out that the PDF files were leaked, however, most of them were taken down. Leaving some users disappointed that they missed their chance at jailbreak their iPad 2 prematurely (even though we strongly suggested you wait till the official release).

If this sounds like you, and you cannot wait any longer to jailbreak your iPad 2 untethered (keep in mind the official release of JailbreakMe 3.0 is imminent), Ryan Vanniekerk managed to get his hands on the iPad 2uUntethered PDF files and he thus has published a how-to guide on his blog for setting up your own version of JailbreakMe 3.0. Keep in mind, that while this may sound exciting, his tutorial is only for an advanced user as it involves changing router settings and other TCP/IP settings on your computer. 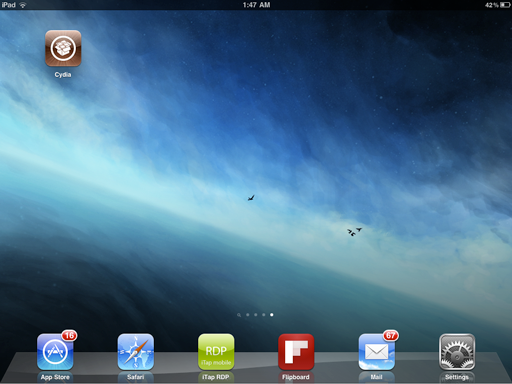 Let us know if you have decided to follow Ryan’s tutorial in the comments.

Note: Though we have urged against following the tutorial (for obvious reasons) that is not to say it hasn’t worked for certain individuals.

Update #1: The official version of JailbreakMe 3.0 has been released! Follow our tutorial to jailbreak your iPhone, iPad, iPod Touch.