Procyon is a web browser for iOS that attempts to merge the best features of Safari, Chrome, and a whole host of Cydia tweaks. Last time I covered Procyon, I found that the iPad version wasn’t working as expected. The user agent spoofing was not functioning, the download manager lacked links to the downloaded content, and the browsing windows felt clumsy on the iPad compared to Chrome’s tabs. In addition to these complaints, there was at least one show stopping bug that prevented me from enjoying my experience. Did Coolstar address these issues in the latest version of Procyon? Read on to find out.

The homepage URL bug which appears in Procyon, even in Safe Mode.

Here’s the bad news first: The show stopping bug is still in this version of Procyon. When Procyon launches, the URL will ‘stick’ to the homepage. If you try to delete the URL, it will instantly reappear. This bug seems to relent after a few minutes, but it is a lingering frustration that prevents me from fully embracing the browser. I was able to replicate the bug in Safe Mode, which means this issue isn’t due to a conflict with a rogue MobileSubstrate add-on and is likely an issue with Procyon itself.

On the other hand, Procyon 2.0.0 shows much improvement over the previous version in nearly every other area. 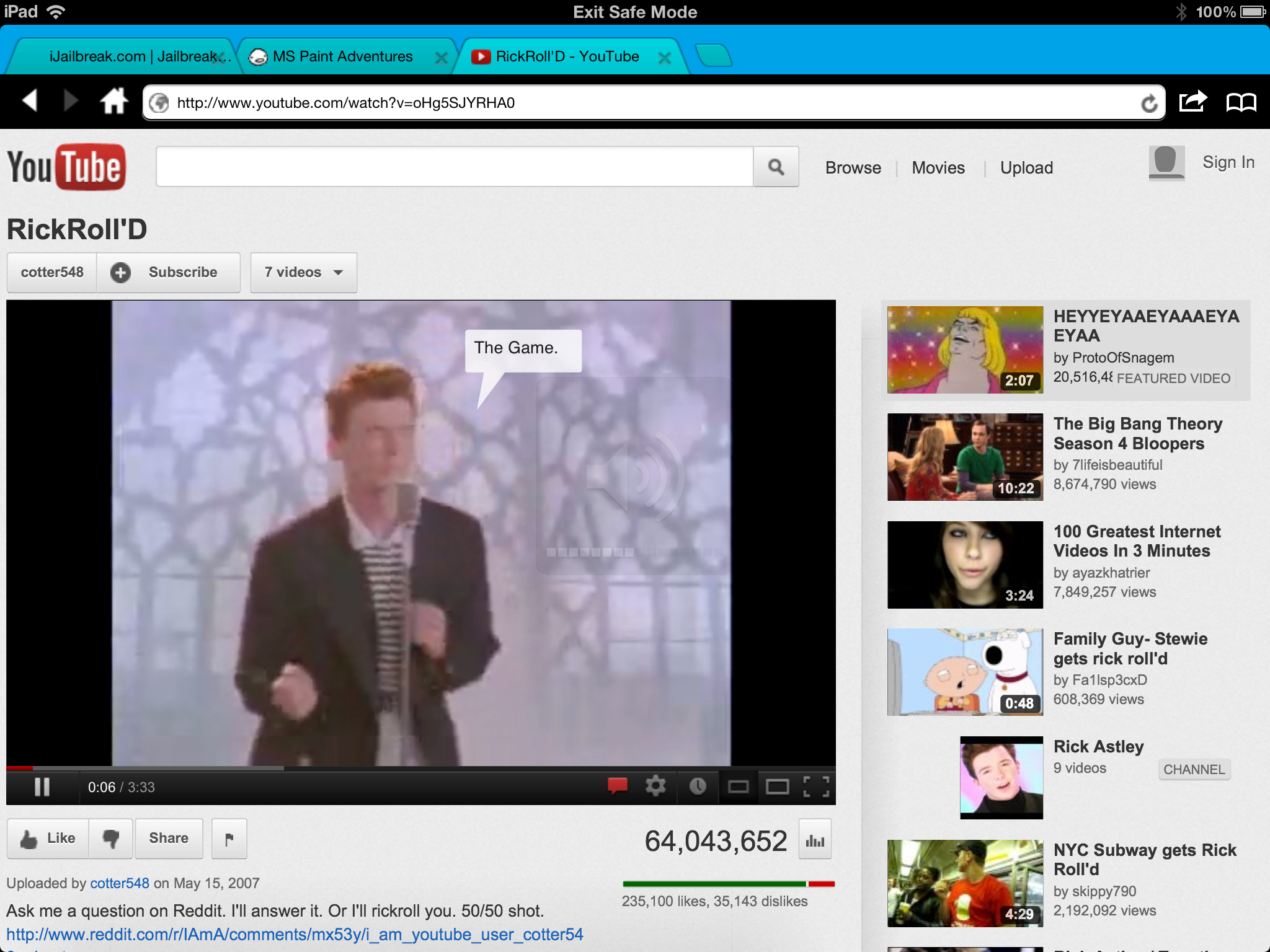 I’m happy to say that user agent spoofing is working correctly in Procyon 2.0. I was able to get my amazing test video running on an iPad despite the fact that the content should be blocked on the device. I had the video running in an HTML5 panel, as if it were running in the Mac OS X version of Chrome. Just a word of caution: the Internet Explorer 9 (Windows 7) user agent in Procyon does not play nicely with Google.

Downloads have been improved too. Instead of disappearing into the file system, there is now a section for Finished Downloads. This means that the files can be instantly retrieved right from the browser. At this point, I would feel comfortable using the built in download manager for my day to day use.

In terms of new additions, Procyon now supports tabbed browsing, similar to Chrome. I’m a huge fan of tabbed browsing, given adequate screen real estate. It’s a definite step up from Procyon’s previous method of pressing a button and scrolling through pages.

Another new addition is Adblock (Beta), which unfortunately doesn’t seem to prevent ads. After setting the option and respringing, ads continue to appear. Even on test pages for a basic ad blocker, Adblock beta does not seem to have any effect. 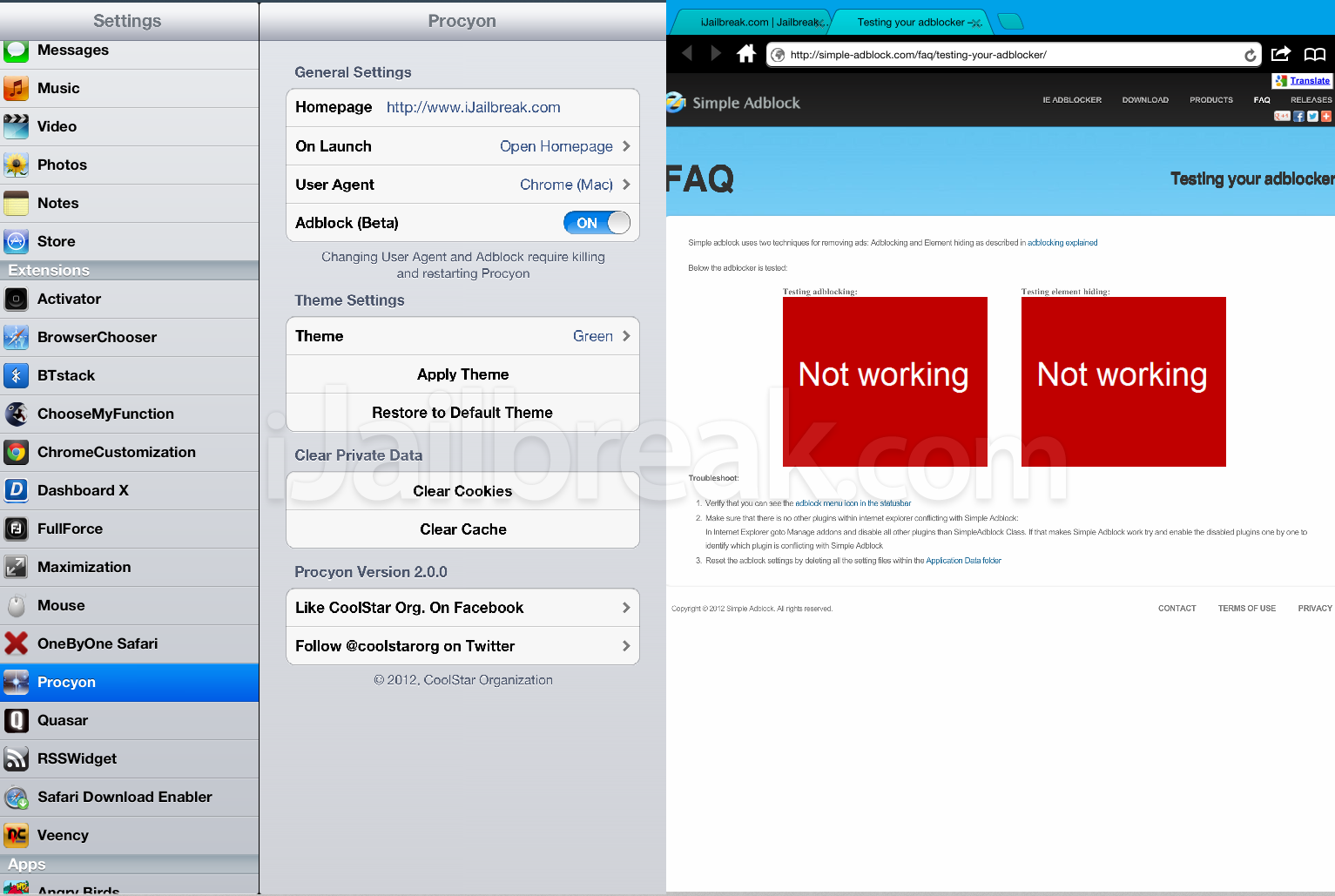 While you can replicate Procyon with a handful of tweaks for Mobile Safari, Procyon is a fast alternative that has many great features right out of the box. The browser is available for free on the BigBoss repository. At this point I would not hesitate to recommend Procyon if not for the frustrating homepage URL bug. That said, with this level of improvement over such a short time, this is definitely the utility browser to keep your eyes on.

What features would you like to see in an alternative web browser? Share your thoughts in the comments section below.

Update: As of version 2.0.1, the show stopping address bar glitch as been resolved.