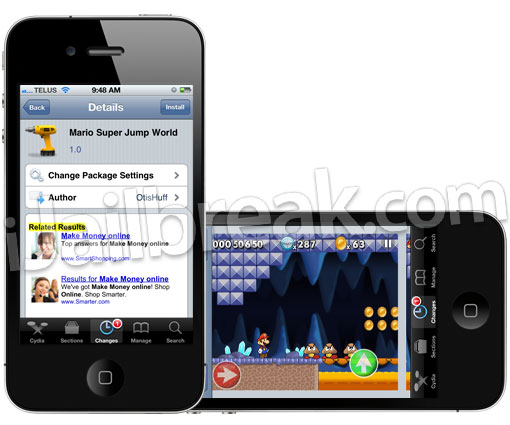 Step 1) – Download and install the Super Jump World Plus iOS game to your iPhone, iPod Touch or iPad using Installous.

Step 2) – The next thing you will need to do is download and install the Mario Super Jump World Cydia tweak to your iPhone, iPod Touch or iPad.

Step 3) – Next you will need to install a file-system editor program like iExplorer to your Mac OS X or Windows computer as you will need to move sound files around to setup the Mario Super Jump World Cydia tweak.

Step 4) – With the file-system editor program of your choice installed and up and running navigate to the following directory:

Copy the sound files in this directory and paste them to the directory shown below:

Note: This should overwrite all the sound files in the directory.

Congratulations! You have just transformed the Super Jump World Plus iOS game into Super Mario. For more how to guides like the one you followed please visit iJailbreak’s How To section by clicking here. Additionally, please leave any questions or thoughts in the comments section below…