Have you ever noticed in your status bar that there are two separate elements for the battery level of your iOS device? An icon and percentage number. Do you think it takes up too much space? Would you like to have one image that does both? 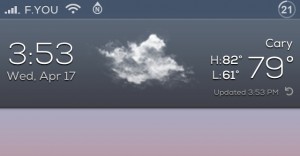 Live Battery Indicator seems to be a pleasant way of combining both the battery percentage and the juice level indicator. However, I feel like as a whole the image seems to barely fit into the status bar, which almost drops below the background image and skims the top of screen. In addition, the image doesn’t change when the user charges their iPhone. In my opinion, I feel as if the image needs to come down in size to fit accordingly, but others may like it. Overall the design is nice, compact, simple and doesn’t clutter up your status bar.

On the other hand, users might be pleasantly surprised to find there is a WinterBoard theme bundled with the tweak. The theme gets rid of the live circle image and replaces it with the traditional battery icon image. This means the battery image is static, but the numbers inside the image will change. The traditional-like image is noticeably smaller and seems to fit evenly within the status bar, unlike the Circle image that barely fits.

Live Battery Indicator is a free tweak in Cydia from the ModMyi repo by pw5a29. There are no settings to configure after installing.  Users also have the ability to create their own themes and instructions can be found in the stock Settings app. Let me know what you all think of the tweak and leave your comments below. Don’t forget to check out the video below as well!