The Tweak: The interface elements Fade affects include pretty much everything on the SpringBoard: dock, icons, and even Dashboard X plugins all turn transparent, showing off nothing but the background, the status bar and the Notification Center.

I suspected this would be an iPhone-only tweak, just an animation effect for small-screened devices, and I was wrong. Fade works when you pull down the iPad’s pane, fading the entire screen. On an iPhone or iPod Touch the effect is subtle, with the icons disappearing as they are covered by the Notification Center–on the iPad the effect is dramatic and stunning. There’s nothing subtle about fade on the big screen, but it looks great.

Fade on the iPad. The transparency effect follows the position of the Notification Center panel.

Caveats: My only reservation with the tweak is Fade has an odd interaction, or rather non-interaction, with the BlurriedNCBackground Cydia tweak. While the undisturbed UI elements disappear entirely, the blurred icons still appear behind the notification panel as normal, which is a strange effect for the overlay. This is likely an issue with BlurriedNCBackground and not Fade, but it’s something to keep in mind when installing tweaks as it may be an undesired effect. 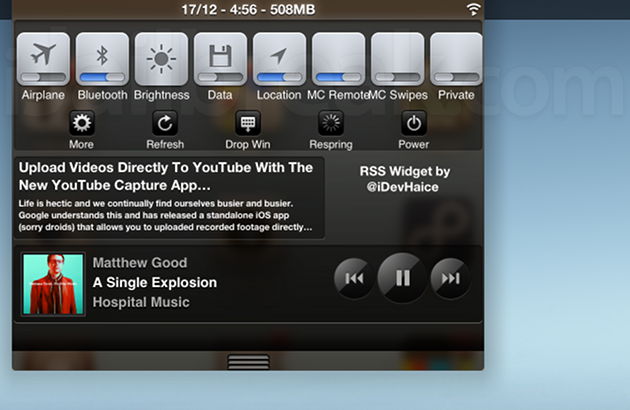 It’s a matter of taste, but you probably don’t want invisible icons showing up behind BlurriedNCBackground.

Where to find: Fade is available for free in the BigBoss repository on Cydia. There are no setting to configure, just install.

Share your thoughts on the Fade effect for Notification Center in the comments section below.