Philippe, the developer behind numerous iOS interface tweaks, has just updated BlurriedNCBackground with a complete overhaul of the original code. This rewrite adds features such as full support for the iPad’s notification pane and a simpler preferences panel, while it supposedly fixes the memory leaks found in the previous version, improving performance. 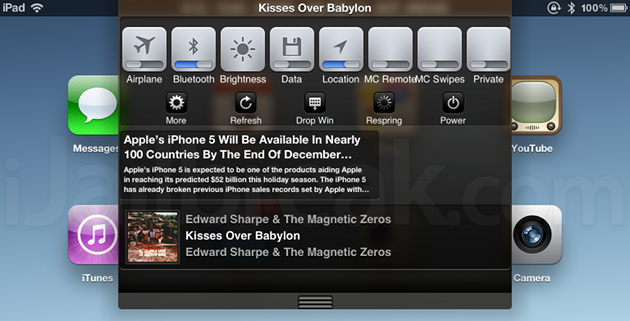 BlurriedNCBackground running on the iPad 3, with widgets.

The Tweak: If you’ve never used BlurriedNCBackground before, the tweak replaces the Notification Center’s standard gray texture with a tinted transparency that blurs the background behind it. You can even set the color of the tinted background, its transparency, and the intensity of the blur effect.

There’s one snag–the ‘simpler preferences pane’ is in French. I don’t know about you but je ne parle un peu français. That said, the preferences panel isn’t too difficult to figure out. There’s a slider marked “rayon gaussien” which controls the intensity of the Gaussian blur effect. Another slider marked “Opacité” controls the transparency of the background tint, while “Couleur de teinte” option should be self explanatory.

Performance: As advertised, BlurriedNCBackground works just fine on my iPad 3. The tweak looks great on the iPad… instead of blurring the whole screen on the iPhone, the iPad version just blurs the portion the notifications pane covers, which makes it look even more like a glass overlay. BlurriedNCBackground worked with all the notification widgets I enabled without any issue, including SBSettings, MC Pro Controls, and RSSWidget.

There is a tiny delay before the Notification pane opens–about the time it takes to blink twice–which I wouldn’t have noticed if I wasn’t watching for it. The tweak doesn’t otherwise have a negative impact on performance, but this is the most powerful device currently jailbroken, so your mileage may vary.

Where to find: BlurriedNCBackground is a free tweak which can be downloaded from the BigBoss repository in Cydia. The control panel for the tweak can be found in Settings.

Share your thoughts on BlurriedNCBackground in the comments section below.