Only a few days ago the Evad3rs released an update for Evasi0n7 that brought about specific bug fixes that were effecting a small user base. Another big change this update brought about was the removal of the Chinese installer TaiG.

The problem was, however, if you wanted to take advantage of the fixes that Evasi0n7 1.0.1 brought about, then you would have had to restore your device and re-Jailbreak (obviously a tedious thing to do). As promised, however, the Evad3rs released a package through Cydia that is aimed at those who haven’t yet Jailbroken their device with Evasi0n7 1.0.1.

This package is called Evasi0n 7.x Untether, and its 0.2 update is available right now via Cydia’s default Telesphoreo repo. 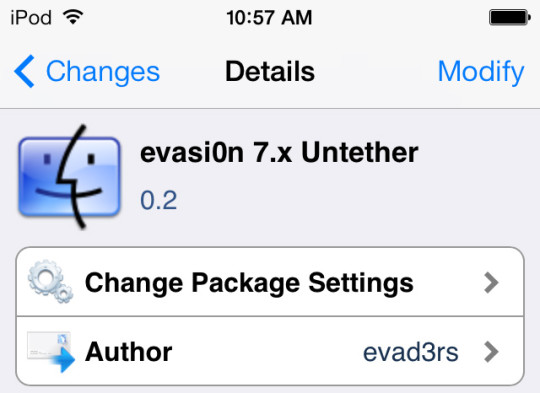 So just what can you expect from installing Evasi0n 7.x Untether to your Jailbroken iOS 7 device?

Well it will remove the TaiG splash screen if it was previously installed on your device and add some features that Saurik will be relying on in a future update to other packages (which of course is likely MobileSubstrate).

Those that have already Jailbroken with Evasi0n7 1.0.1 will not have to worry about installing this package, but those who Jailbroke with the original version should be prompt to update upon refreshing their sources.

It is recommended that you install the package right now if your situation is the latter, and keep in mind that the package must be kept installed to maintain your Untethered jailbreak.