Whenever a prominent figure in the Jailbreaking community develops a Cydia tweak, it is usually a big deal. Today none other than Saurik, the creator of Cydia, has made a new Cydia tweak and it is definitely worth checking out.

Saurik’s new Cydia tweak is called Cyueue and it essentially modifies the Music application to add a playlist called “Cyueue” where songs get “queued” when you are already playing something else, but want to plan the song(s) to play after.

The reason Saurik developed this Cydia tweak was because of user demand. He went on two say “every few weeks, people had been asking for the same extension: a way to queue songs up without having to stop your currently playing song.” As such, Saurik actually started working on this tweak during the iOS 5 firmware generation, but was interrupted by the release of Rocky Racoon (the iOS 5.1.1 Untethered Jailbreak). Once things calmed down he started work on the tweak again and was finally able to finish it off for the release of the most popular Jailbreak of all time — Evasi0n. 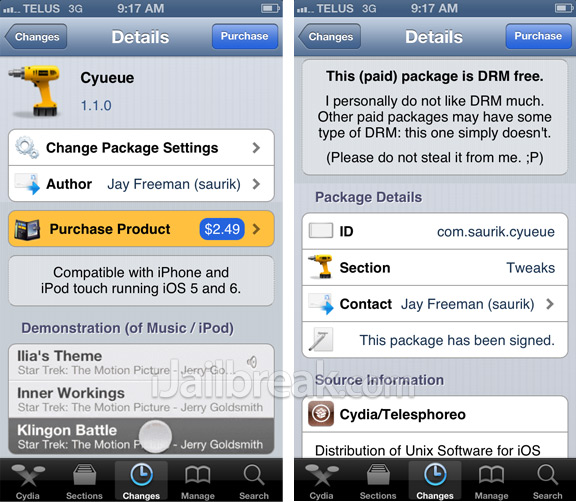 In case you can’t see the use for Cyueue, or don’t really understand it, Saurik has written a wonderful example scenario that you can read below…

So, you’re at a house party; unless you managed to swing a live band, the music is probably playing off an iPod (or, these days, maybe an iPhone).

Everyone is having fun, doing whatever it is that people do when they hang around listening to music (I’m sadly not cool enough to know what that is).

Inevitably, someone knows of some epic song they want to play next. Only, the iPod doesn’t let you do that: if you click a song, it just plays it right now.

You can sit around and wait for this song to finish, but that’s boring, with someone sitting around at the iPod not doing that thing only cool people do.

What you really want to be able to do is to just browse to the new song, queue it up immediately, and be able to do that over and over to add more songs.

Technically, you can do this on your iPod; it is just infuriatingly painful and requires that someone had already been using the playlist beforehand.

That’s the problem Cyueue solves: when you are already playing music, attempts to play more music divert you onto a special queue of “next” songs.

So, there you have it. Cyueue essentially allows you to specify which songs to play next, without actually have to pre-create a Playlist or stop the currently playing song to play another track.

It is worth mentioning that Cyueue does not have its own Settings panel, nor does it have a standalone app. Furthermore, you will not see anything change until you attempt to play a song while you are already playing another song.

When you do this you will see three options in a menu:

Once you get used to doing this, you can just double-tap on the left, middle, or right of the row to rapidly access Now, Next, and Later, respectively.

Cyueue is available in the default Cydia repository for a price of $2.49 and is definitely worth the money. Let us know what you think of the Cyueue Cydia tweak in the comments section.