The GM seed of iOS 9 has only been out for a couple days, but we already have a proof of concept video demonstrating an untethered iOS 9 jailbreak on an iPhone 5. This one comes from a trusted name in the jailbreak community, iH8sn0w. 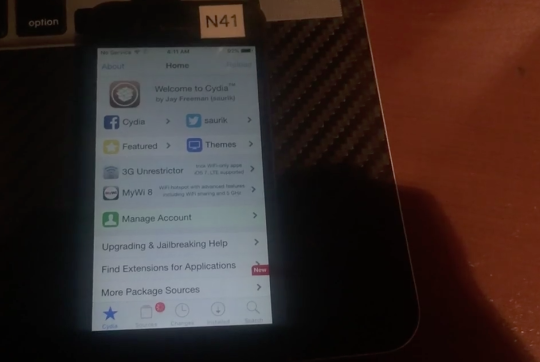 Although he doesn’t provide any details for his new jailbreak, we can see from the video that he is running the GM seed of iOS 9. We can see a custom boot logo, then a verbose boot. He opens settings to show us the firmware and he opens Cydia to show it’s all working nice and smooth.

It has been a long time since iH8sn0w has released a jailbreak tool and it is unknown if he will release this one to the public. In the past, iH8sn0w has worked with the iPhone Dev Team (creators of the popular PwnageTool and Redsn0w jailbreaks). Could we see a return of the famous jailbreak team? Things have been pretty quiet for them since the Pangu and TaiG teams took over the scene.

iH8sn0w added this to his video:

Poking into iOS 9 is fun. A little annoyed at some new things. But very surprised at how similar it is to iOS 8 internally.

Worth noting, iOS 9+ arm64 iDevices now enforce a checksum on __TEXT/DATA.const regions of the kernel through the use of TrustZone. Modifying said sections will cause the device to panic (either at kernel or EL3 will force a reboot if the kernel refused to gracefully panic). Essentially, it’s KPP (Kernel Patch Protection). You can race it though if you want to play with things. Just be quick! ;P

Also, there should technically now be two additional partitions (baseband_data [s1s3] and logs [s1s4]) but didn’t really bother with those as they weren’t critical.

We’ll keep an eye on this and let you know more as this unfolds. iOS 9 is officially released on September 16th, so we most likely won’t see anything released before that. Even then, if this jailbeak is going to go public, it’s going to take a while to build the desktop app, test on all the devices, etc. It is still exciting to know that iOS 9 is still vulnerable, in some way, allowing jailbreaking to continue.

Do we need a Jailbreak for iOS 9?

As Apple keeps adding features to iOS that obviously originated in the jailbreak community, we have to ask ourselves if we really need to jailbreak anymore. Well, that depends on what you use your jailbreak for. Tweaks? UI customization? It is doubtful that Apple will add customizations to iOS, like Winterboard does, so this is a solid reason alone to continue jailbreaking. Tweaks are a great way to see just how far iOS and Apple’s devices can be pushed. As we’ve seen in the past, the jailbreak community has been a great hunting ground for Apple to add new features to iOS.

I’m excited to see an iOS 9 jailbreak, are you? Let us know in the comments below.