Apple has released another minor update that includes several bug fixes, similar to last weeks iOS 9.0.1 update. The iOS 9.0.2 update is currently being seeded to users.

The iOS 9 public release didn’t go as smooth as Apple expected. There were plenty of problems with the new firmware and it even left several users with a bricked iOS device and unable to update. Some users who were able to update to iOS 9, complained of lag and slow performance. 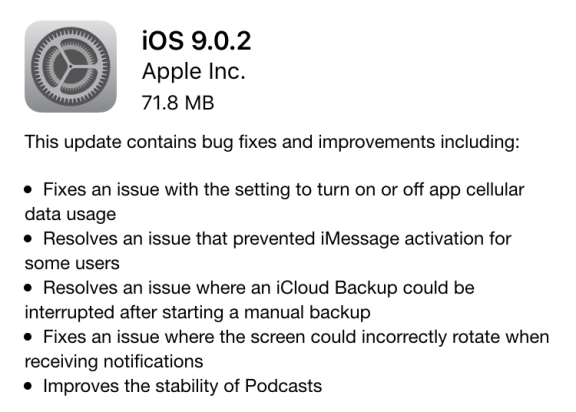 All of the above issues were patched in the iOS 9.0.1 update, which was released to the public last week. In iOS 9.0.2, Apple continues to fix more bugs, such as, failure to activate iMessage for certain users.

Apart from fixes the aforementioned issues, the new update also improves the stability of podcasts. iOS 9.0.2 is currently available as an OTA update for those running iOS 9.

Simply go to Settings > General > Software Update on your iOS device and you should be notified of the new update. Click on Download and Install to update.

You could also download the specific IPSW file for your iOS device from the Direct Links and do a fresh install using iTunes.

Apple is also seeding iOS 9.1 beta 3 to developers right now. If you’re a developer, you can get the latest beta 3 update via OTA or you can download the firmware file from Apple’s iOS developer center.