iOS 8.1.1 is out! After two weeks of testing, Apple has seeded the iOS 8.1.1 update to the public. This is a minor update that includes certain bug fixes and performance and stability improvements for the iPhone 4s and iPad 2. 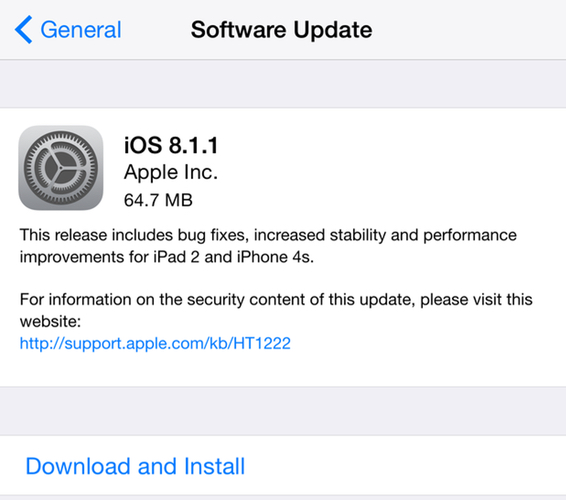 You can download the latest iOS 8.1.1 update via OTA by going to Settings > General > Software Update or you could download the IPSW and use iTunes to update your iOS device. The update carries a build number 12B435, weighs around 65 MB and apparently improves performance on the aging iPhone 4s and iPad 2. A recent video comparison showed that the iOS 8.1.1 beta 1 didn’t show much improvement in performance on the iPhone 4s.

If you’re on a jailbroken iOS 8 device, it is highly recommended that you don’t update to iOS 8.1.1. Apple has patched the Pangu 8 jailbreak in this latest build, so if you update, you’ll lose your jailbreak.

A new software for the Apple TV and OS X Yosemite 10.10.1 was also released earlier today.