The smartphone market isn’t like it was back in the years when Apple first unveiled the iPhone. This revolutionary handset had other smartphome manufactures scrambling for a good couple of years before they could reach its level. Nowadays however, the smartphone market is littered with competition, and good competition at that. If you had to limit the top smartphones in 2013 down to just 6 you would probably think of the Samsung Galaxy S IV, Apple iPhone 5, Sony Xperia Z, HTC One, Samsung Galaxy S III and the Nokia Lumia 920.

There have definitely been plenty of comparison videos between these handsets, but for the first time we have an excellent screen comparison by PhoneArena. PhoneArena was lucky enough to get their hands on the Galaxy S IV early and this allowed them to compare it to the top contenders of the smartphone market today.

So, how does the Galaxy S IV rank up to other smartphones?

As PhoneArena points out, resolution is the name of the game in 2013, as most high-end Android phone manufacturers are equipping their creations with 1080p screens that reach astronomical pixel densities of 400+ ppi. The HTC One leads the pack in that respect as it couples the 1080p resolution with a 4.7” screen, which makes for the incredible 468 ppi. The second places is shared by the Xperia Z and Galaxy S4, the 5” displays of which have a pixel density of 441 ppi. Third is the Lumia 920 with 332 ppi, and immediately after it comes the iPhone 5 with 326 ppi. Finally, we have the Galaxy S III with 306 ppi. It is worth noting that any pixel density over 300ppi is very sharp, but smartphone makers are pushing the boundaries to the extreme. 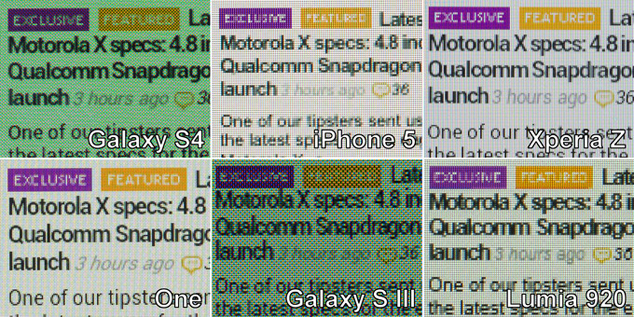 As for color reproduction, the iPhone 5 and HTC One are definitely at the top! The Nokia Lumia 920 is also quite good, though it’s a bit less vibrant. The Xperia Z isn’t bad as well, though, it’s very easy to lose the liveliness in it just by viewing it at a very slight angle. Samsung is still struggling to achieve a more true-to-life image with its AMOLED screens, which have always gravitated towards the colder side.

When it comes to the overall best smartphone displays the iPhone 5 and HTC One were heading most of the divisions. Samsung has certainly made a lot of progress with their display in the Galaxy S IV, but this comparison showed us that there’s still quite a bit of room for improvement.