Today Engadget is reporting that RIM’s (Research In Motion) Blackberry Playbook has just been jailbroken. This means that hackers have been able to gain root access to the Blackberry operating system that is being run on the Playbook. This allows any developer/hacker to have complete access to anything on that particular Playbook. The creators of this Playbook jailbreak have noted that they plan to release a tool called DingleBerry that will simplify the process of jailbreaking.

Now, to the average person this may sound like good news (keeping in mind all the innovation that has come out of Jailbreaking Apple products). If you ask RIM, however, I am sure they are not as thrilled. This is because one of RIM’s few remaining strength’s over Apple’s dominant foothold in the Smartphone market is their security; both in terms of encrypting and securing the messages you send over the RIM network, and device security.  This is why BlackBerry products became so popular with enterprises and governments.

With this new Playbook OS being Jailbroken, however,  it poses a serious threat to how secure RIM’s new set of Smartphones will be (as they are set to run the same OS as the Playbook). All of this leading up to the fact that it could be a turning point in the eyes of all who turn to RIM for secure products, such as Business and Government, to move over to Apple’s iOS devices.

There is sure to be a lot of future developments on the topic of Jailbreaking Blackberry devices and thus we will keep you updated on the matter. In the mean time, let us know what you think about eventually being able to Jailbreak Blackberry devices in the comments section below…

If you were one of the individuals patiently waiting for the BlackBerry Playbook jailbreak, then you will be glad to know that you can now download DingleBerry Beta 0.5.1. 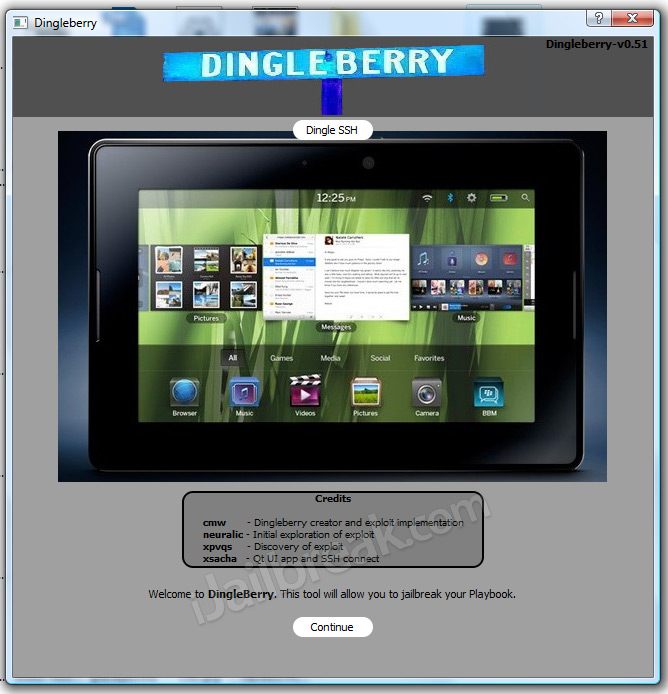 Note: At this time the DingleBerry jailbreak will not be very useful to “Non-Developers”. This is because there is currently no form of Cydia installer for the BlackBerry Playbook, and very few if any tweaks. Thus, it is recommended that only developers embark on Jailbreaking their BlackBerry Playbook.

We will keep you updated if more comes out of this BlackBerry Playbook jailbreak. In the mean time you can download DingleBerry Beta 0.5.1 from the iJailbreak Downloads Section.

Please don’t forget to let us know if you have any questions or thoughts in the comments section.