It is an obvious fact that Apple is not a fan of Jailbreaking. Since the very beginning, Jailbreaking has been something Apple has tried to stop. They have done this through releasing regular firmware updates, using new bootroms in their iOS devices, etc. Even certain companies who have released applications in the App Store are not a fan of people who Jailbreak their iOS devices. In fact, applications like Time Warner Cable have been built with Jailbreak detection software to disable the application from running on Jailbroken iOS devices.

Luckily however, as Jailbreaking is all about innovation, there is a Cydia tweak available called xCon that will patch these applications so that they can still run on Jailbroken iOS devices. It has been some time since we have updated you on the status of xCon, thus today we thought it would be a good idea to shed some more light on this Cydia tweak once again. 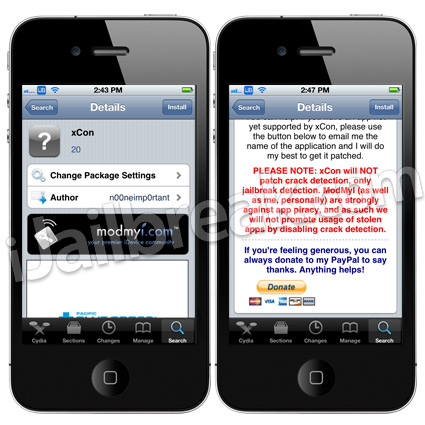 Over the last few months xCon has seen numerous updates to improve compatibility with a variety of new services, improve stability and also fix numerous bugs a lot of people initially complained about. For those curious on just what services xCon now supports you can take a look at the compatibility list below.

xCon works by running apps with anti-jailbreak protection in a special contained environment where they cannot detect whether you have a Jailbroken iDevice or not. Thus, allowing you to run whatever App Store application you wish, without having to worry about whether it has anti-jailbreak protection or not. The developer has even mentioned that if you notice an application that is not supported by the xCon Cydia tweak to send him an email (n00neimp0rtant@me.com).