VideoPane is a brand new tweak in Cydia that you absolutely won’t want to miss! It was developed by Ryan Petrich and what the tweak allows you to do is multitask while you are watching any form of video.

With VideoPane installed when you watch videos from apps like YouTube, iTunes or Netflix a popup window will appear asking you whether or not you want to detach the video. If you do tap yes to detaching the video a tiny video player widget will appear that you can drag around the screen and even make slightly transparent if you double tap it. 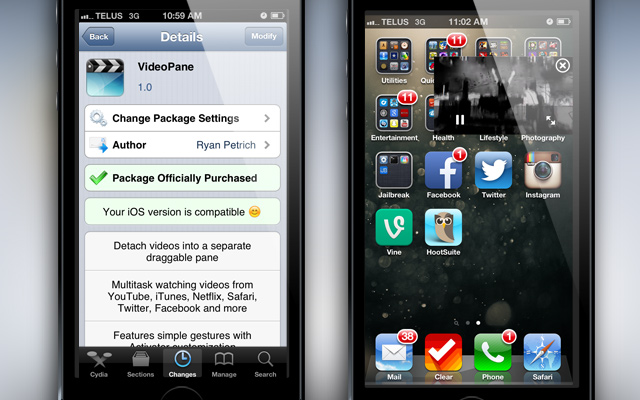 This means you will be able to watch video while you are doing things like browsing the web, texting, checking your social media accounts etc.

This is now another feature from the Galaxy S3 that has come to iOS through the power of the Jailbreaking community. The other feature that came to iOS recently was the smart pause functionality that pauses video intelligently when you aren’t looking at your device. 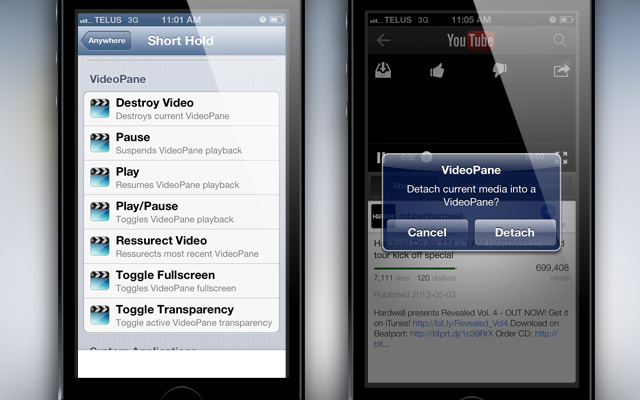 When you install VideoPane it will begin working. Just open up any video app and you will be prompt whether or not you want to Detach the video. There is actually no preferences panel associated with the tweak in its initial release, but there are some configurable Activator actions that can be applied like Play/Pause, Destroy Video, Toggle Fullscreen etc.

All in all VideoPane is a great tweak that I suggest checking out. There are some minor annoyances right now when it comes to reliability and the lack of customizable options, but these issues will likely be sorted out in a future update.

You can find VideoPane on the BigBoss repo for $1.99 and it is worth every penny. Let us know what you think of the tweak in the comments.