Earlier this week we told you about the SARA Cydia tweak that brings Siri to older models of the iPhone, iPod Touch and iPad. Though results with SARA were hit and miss according to the feedback we got, SARA still may be a viable alternative to Siri for those who are not willing to setup their own Spire Proxy server or do not want to pay for a private Spire Proxy server. If you are a fan of SARA or are interested in trying out SARA you will be glad to know that yet another extension was released for SARA, dubbed SaraDictation.

The SaraDictation Cydia tweak brings voice diction to older models of the iPhone, iPod Touch and iPad. This will allow you to take voice notes, reply to SMS messages through voice and do whatever else you can think of without having to type. 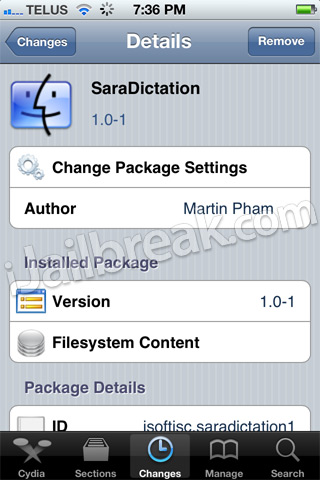 Unfortunately the SaraDictation Cydia tweak does not really integrate natively with the iOS 5 firmware. As instead of pressing the mic icon on your keyboard to activate Siri Diction you will need to set an Activator command for SaraDictation and then actually paste the voice-to-text recording where you wish to use it. Regardless, if you are interested in the SaraDictation Cydia tweak you can find it in in the developers repo (shown below in the quoted area). You can add this repository by launching Cydia, going into the manage tab, then the sources section, clicking the edit and then the add button: