Apps on iOS devices run as full screen applications by default, following a design philosophy where your phone becomes the app its running. While Apple’s approach made the iPhone iconic, there are some tasks where it just isn’t practical to flip back and forward between apps.

If you jailbreak and have an iPad, you’ve may have heard there’s a different approach. Quasar is a window manager for the iPad which allows multiple apps to run side by side. Quasar’s biggest pitfall is that it is fairly pricey for a tweak. While $9.99 isn’t a ludacris sum of money, it’s a lot to pay for a Cydia tweak that could turn out to be a useless buggy mess. Is Quasar worth your hard-earned Hamilton? Here’s what you need to know:

First off, Quasar largely delivers on what it promises. If you need to switch between several apps for one task, Quasar is the only way to keep them all open on one screen. I found this useful for games of D&D. Switching between full screen instances of QuickRoll, my character sheet, and various reference documents cuts down on the practicality of using digital tools for dungeon crawling. With Quasar, it’s really easy to flip through my character sheet and take notes, while keeping my dice roller open and ready for whatever I’ll need it for. 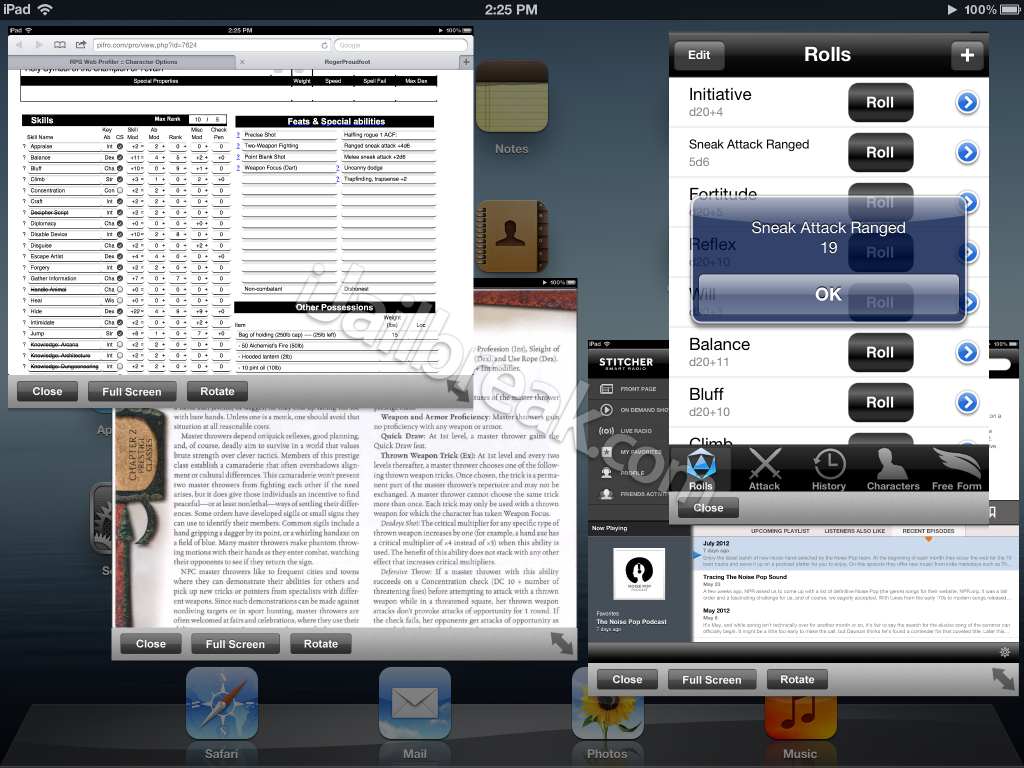 Multitasking works well, but you may need a device with a Retina display to read the small text

Laugh if you want, but the pen and paper RPG is my acid test for computer multitasking. While D&D is a niche hobby, it’s an intensive game that requires taking notes, checking rules, and quickly making actions on the fly. If you rely on one app for your heavy lifting but constantly open other pages for reference, you will find Quasar’s windows incredibly useful. If this sounds like your use case, get Quasar. 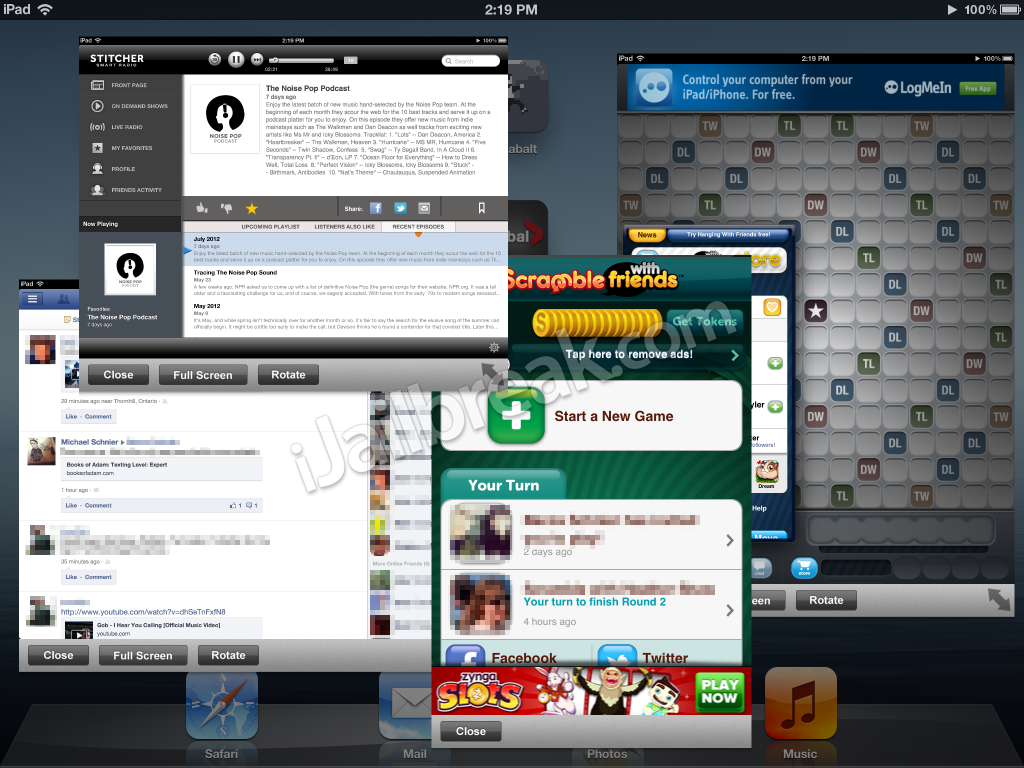 Multitasking is also handy if you’re dealing with many apps that constantly receive messages and updates. You can save time by having Facebook, Twitter, and Words With Friends open together, instead of switching between them. This isn’t a critical use, but it’s a nice perk. If you want to use Quasar as your iPad’s primary application manager there are some pitfalls you should be aware of.

Introducing a window manager to the iPad is a seriously ambitious tweak. As you may expect, Quasar occasionally causes glitches. Certain situations cause full screen mode to glitch out, compressing the screen horizontally. (This usually requires a respring to fix.) Switching an app to full screen mode while its loading can cause the iPad to freeze, requiring a reset. Certain iPhone games process touch screen input stragely in Quasar, especially dragging a finger. Opening Facebook from a lockscreen notification sometimes causes Quasar to crash. Stability is a concern, but these aren’t major issues.

The bigger issue is that Quasar’s iPhone app compatibility is disappointing. Native iPad apps can run full screen, in both portrait and landscape modes, and the windows can be resized as well. iPhone apps in Quasar are strictly stuck in portrait mode at their default size. (Small.) To make matters worse, iPhone apps which require landscape orientation are unusable with Quasar. If you rely on a lot of iPhone apps, Quasar might not work for you. Luckily there is a workaround. 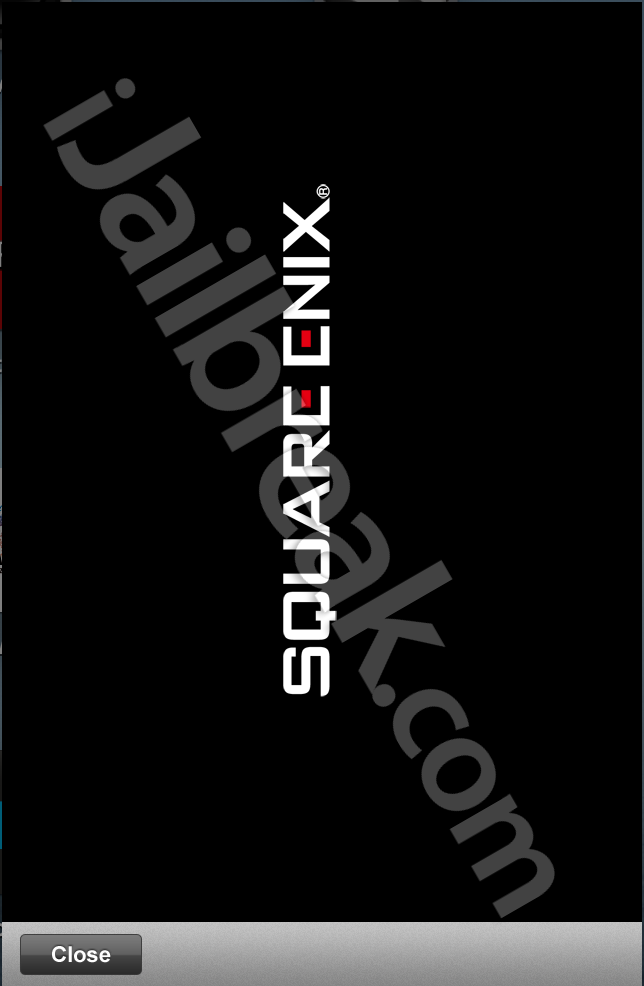 iPhone apps in Quasar look like this, with no buttons for fullscreen support, rotation, or size adjustment.

Quasar’s essential companion tweak is FullForce. FullForce allows iPhone apps to run as if they were native iPad apps. After having “gone native,” these apps are fully compatible with Quasar. I even found that many of the apps which reacted strangely in iPhone mode show no issue running in Quasar with FullForce active. The only downside to FullForce is that is not all apps support it. However, this FREE workaround is available in Cydia and greatly improves Quasar’s usefulness. 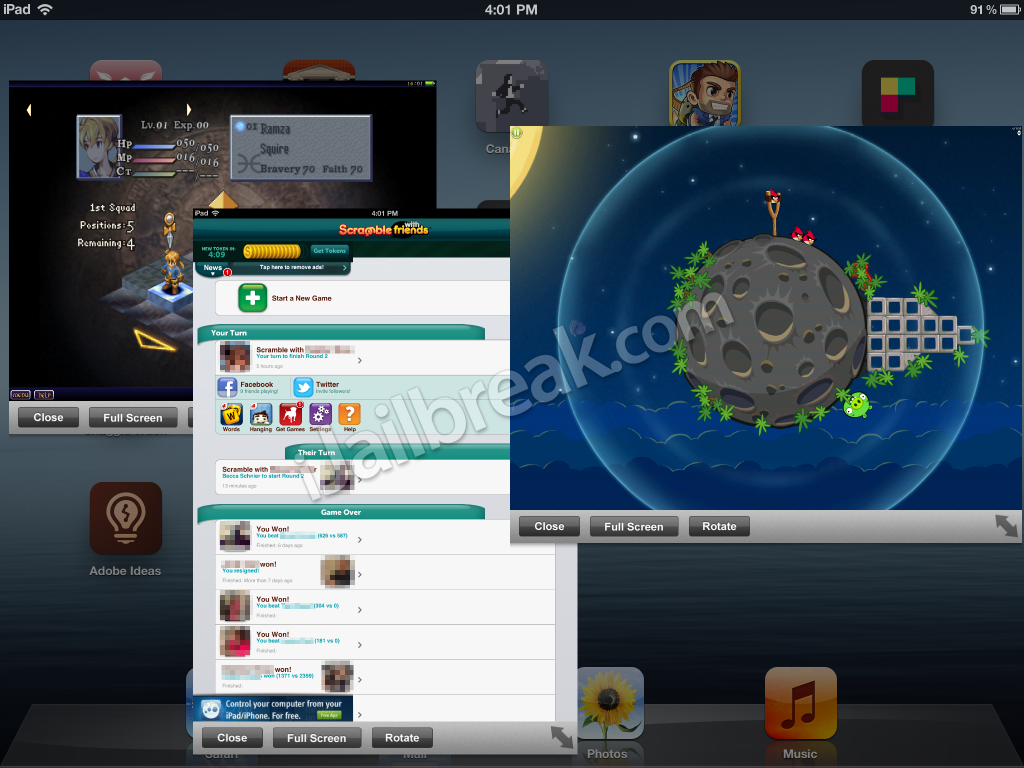 FullForce does not fix every compatibility issue, but it comes close

At the bottom line, if you think you need Quasar then you should buy the tweak from the Cydia Store now. If you just think Quasar is cool, you may be better off waiting for a more stable version with iPhone app support.

Have you tried Quasar yet? Share your experience with true iPad multitasking in the comments section below.