iOS 5’s Twitter integration is somewhat underwhelming by default. It allows you to send tweets with attachments within apps, but it doesn’t provide a quick way of sharing an unaccompanied tweet. What if you have something you need to share quickly? Dashtweet is a Dashboard X widget which places a Twitter bar on your home screen, like the widgets available on Android phones. With Dashtweet a post to Twitter is only a press of the home button away. 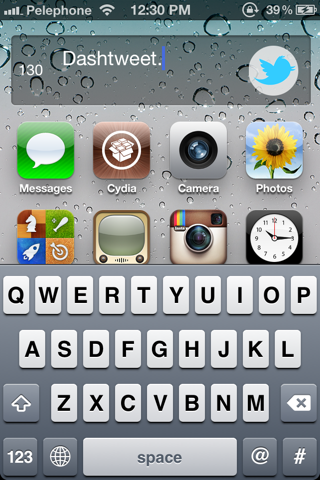 The button glows blue when you input text, otherwise it is an inoffensive black.

Dashtweet uses iOS 5’s integrated Twitter settings, so there’s no need to log in. The bar takes up the same amount of space as a line of tiles on the iPhone and doesn’t look out of place with Apple’s default theme. Dashtweet does keep a character counter beside your text, so you don’t go over the 140 character limit – but if you do, it natively supports Pastie for longer Tweets.

Dashtweet is a FREE widget and is available in the BigBoss repository on Cydia, but requires Dashboard X ($1.99) and OS 5’s Twitter integration. Along with “Clock Widget” this is one of the first add-on widgets available for Dashboard X. Dashtweet provides more utility than most of the other widgets, and is a must have tweak for anyone who has Dashboard X installed and posts often to Twitter. 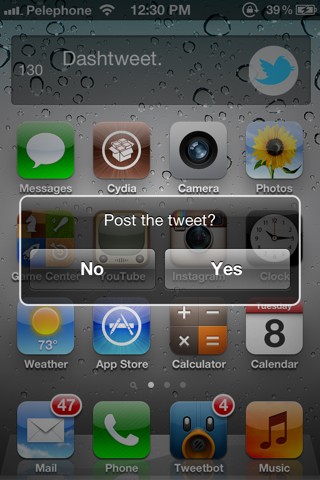 Would you prefer to be able to tweet from the home screen than through apps? Or would you prefer to have the extra 4 icons in SpringBoard real estate? Let us know what you think of Dashtweet in the comments section below. (Bonus points if your response is 140 characters or less!)