After the fiasco that Path caused yesterday, people have been very much concerned about their phone contacts being accessed without permission. It was found, by a Blogger, that Path secretly uploads all of its users mobile contacts and addresses to their servers. If that’s not bad enough, the app doesn’t even ask for users permission before doing so! 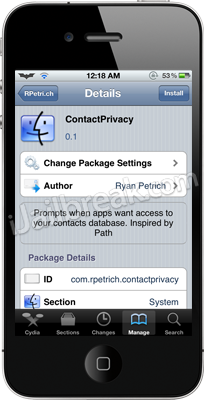 Ryan Petrich, the famous jailbreak developer has just released a new Cydia tweak called ContactPrivacy, which takes care of such apps. What this tweak does is, it warns users about apps such as Path that access your personal contacts without your permission. A very useful tweak, don’t you think? Unfortunately, this is only available for jailbroken iOS devices.

When using apps that access your contacts, the ContactPrivacy Cydia tweak will give you a notification with options to Allow or Disallow. The developer, however, has stated that some apps may not work properly after revoking contacts access. So, you’ve been warned! To those who want their contacts untouched and within their power, this Cydia tweak is very useful and important.

ContactPrivacy Cydia tweak is currently available in Cydia for free. Just add repo: http://rpetri.ch/repo to your sources and you should be good to go!