We’ve covered AutoProtect in the past, which is a tweak that disables the password protection on an iPhone, iPad, or iPod Touch so long as you’re on your home network. The idea is you have your password when you are most likely to need it, but it won’t get in the way when you don’t. The developer behind the original tweak, Florent Cardeon, has created a separate tweak as an update for iOS 6.

The tweak: With AutoProtect for iOS 6, you can name up to five WiFi networks which will act as your home networks. While connected to these networks, passwords will be disabled, except in a few cases such as reboots and resprings. 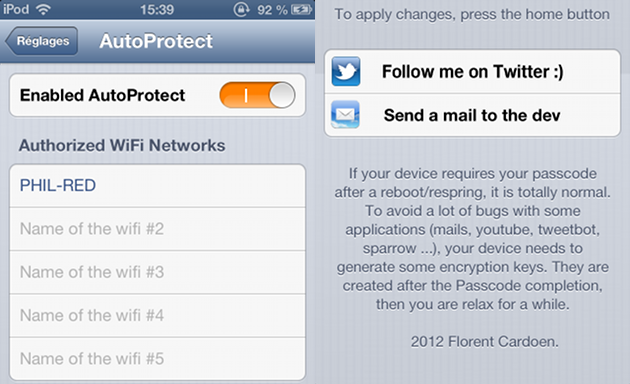 Unlike the original release of AutoProtect (which has since been updated), the method AutoProtect uses to bypass your passwords while on your home network will not break compatibility with applications like Tweetbot or Sparrow. In order to accomplish this, the tweak will generate individual encryption keys for these apps.

Caveats: Be careful about how you set your home networks. If you set AutoProtect to disable your passwords at work, this means that anyone who can get their hands on your phone will have full access while on the network. Also be careful not to use home WiFi networks with common names, like LINKSYS as AutoProtect identifies networks entirely based on name.

Where to find: AutoProtect for iOS 6 can be found in the ModMyi repository on Cydia. Like the version for iOS 5, the tweak is absolutely free. You can configure your home network in Settings.