The folks over at iClarified have managed to get all three versions of the iPad together and perform a network speed test. The first iPad only had Edge and Triband HSPA, the iPad 2 came with Edge and Quadband HSPA and the new iPad takes a big leap with 4G LTE. The speeds have gone up too, like a lot! So, it was quite necessary to see how much of a difference in speed and performance does 4G LTE bring to the new iPad. 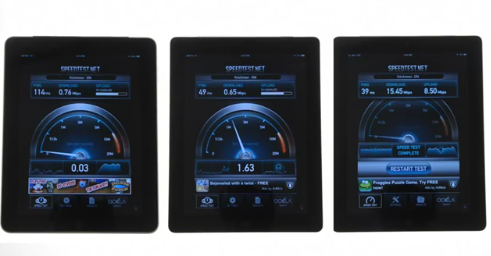 According to the website, the speed tests were performed separately on each iPad and then stitched together into one video. There was no interference and it was all done using the same SIM card. The server used for the test was also the same, so there would be no difference in speeds. Check out the video below:

This video proves that 4G LTE was really a much needed improvement on the new iPad and it is indeed super fast! Are you happy with your 4G enabled iPad?