The iPhone 4s will not be getting any new updates after iOS 8, hence it’s important for Apple to give its users the best performance and experience on iOS 8. Apple recently seeded the second beta of iOS 8.3 to developers. How does this latest beta perform on the iPhone 4s? Well, read on to find out. 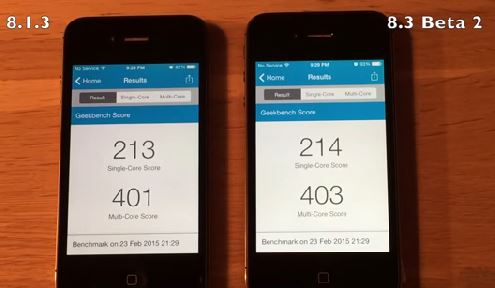 iOS 8.1.3 is the latest version available for the iPhone 4s and it isn’t all that better than iOS 8.1.2 in terms of performance. Apple is, however, planning on releasing iOS 8.2, iOS 8.3 and iOS 8.4 to the public before the launch of the Apple Watch. There is still hope to see improvements on the newer iOS 8 version for the iPhone 4s. Once again, YouTuber Kabriolett performs a speed comparison between iOS 8.1.3 and the iOS 8.3 beta 2 on the iPhone 4s.

As per the test, the performance and speed improvements are much more noticeable than iOS 8.1.3. Remember that this is only the second beta, so there is still a lot of room for improvement, we hope. The iPhone 4s running iOS 8.3 beta 2 manages to launch apps faster, the animations are smoother than before and overall experience is better. Check out the video below to see the full test:

The iPhone 4s running iOS 8.3 beta 2 also manages a slightly better Geekbench score and looks like there’s a slight improvement in battery life. Looks like Apple is still looking out for all those with older iPhone devices that support iOS 8.

iOS 8.3 will bring a bunch of new features including diverse emojis, new languages for Siri, wireless CarPlay support and more. Are you using iOS 8.3 beta 2 on your iPhone 4s? Is it better than iOS 8.1.3?