The iPad Air will be retailing on November 1st in the United States and dozens of other countries.

Like usual, however, select media outlets have been chosen to get a model early to write reviews on their first impressions and sure enough today the first iPad Air reviews are in. 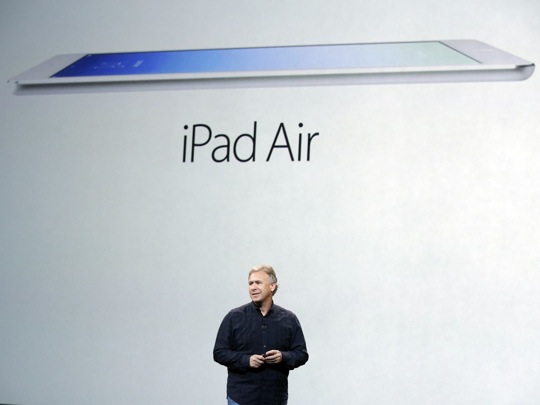 For those that missed the announcement of the iPad Air though, essentially what Apple did was decrease the weight and size of the tablet by making the bezels smaller and new internals, improved its performance by giving it an A7 chip and  gave it a better camera system. With that said let’s dive into some reviews, shall we?

To start things off I will turn it over to Jim Dalrymple from The Loop who praised the iPad Air on its weight and knew the iPad Air “was going to be different” from the minute he picked it up at Apple’s keynote.

When I first picked up the iPad Air, I noticed how light it was. I mean really light. In reality, Apple shaved about half a pound of weight off the new iPad compared to the previous generations. That may not seem like much, but when the old iPad only weighed approximately 1.5 pounds, knocking off half a pound is significant.

It’s very hard to describe how good the iPad Air feels in your hand without actually picking one up. It’s kind of like the first time you saw a Retina display for the first time—shock.

AllThingsD’s Walt Mossberg said that the new iPad Air is the tablet he recommends, hands down and praised the new iPad on its battery life.

The battery performance of the iPad Air simply blew me away. In my tough tablet battery test, where I disable automatic screen dimming and other power-saving features, and combine video playback from the device’s memory with leaving Wi-Fi on and email working at normal settings, the iPad has almost always met its claims and beat competitors by a wide margin.

But this new iPad Air just kept going, clocking a battery life of 12 hours and 13 minutes, which exceeded Apple’s claim by more than 20%. The company says its A7 chip, combined with the fact it controls its own operating system, gives the new iPad the ability to tailor under-the-hood processes so unneeded drains on the battery can be minimized.

Darrell Etherington from TechCrunch thought that with the iPad Air, Apple has made “Big Tablets Beautiful All Over Again.”

The design is the star of Apple’s iPad Air refresh this time around; the 9.7-inch Apple tablet has had the same form factor for two generations now, and that one actually made the design worse – it got heavier, and it got thicker. This new iPad mini-inspired look sheds both size and weight, giving the iPad Air a 43 percent smaller bezel, a 20 percent thinner case, and making it 28 percent lighter, at just one pound.

Engadget did a very in-depth review and commented:

[A]s strange as it may sound, the latest iPad is actually just a larger version of the 7.9-inch mini. It’s as if the smaller device — which launched at the same time as the fourth-gen iPad — was a pilot test for Jony Ive’s new design language. Calling it the “Air” was fitting indeed, since it’s ridiculously small and light compared to previous models. It measures 7.5mm thick and weighs only one pound (1.03 pounds, to be exact), making it 1.9mm thinner and 0.43 pound lighter than the iPad 4. Apple’s also trimmed the left and right bezel by roughly 8mm on each side. If that doesn’t sound significant, just hold the Air for a minute and then pick up an older iPad; the difference is immediately noticeable. Simply put, the iPad Air is the most comfortable 10-inch tablet we’ve ever used.

We will end it off with a review from The Telegraph in the UK from Matt Warman:

If there are faults with the iPad Air, the only two I can find are the suggestion, in the branding, that it’s a totally new product, and the fact that the smartcover now adopts the flimsier three-panel design used in the original iPad Mini. But these are tiny issues. This is the iPad that was already brilliant in an even better design. Almost entirely thanks to the 475,000 tablet apps, iPad Air is the best tablet on the market. And Kindle fans beware – the Air is now more useful for reading, its clever software knowing whether your thumb is interacting with the device or simply holding it.

Light weight, incredible performance and impressive battery life… what more could you want from a tablet? Will you be getting an iPad Air, drop us a line in the comments section below on why or why not.