One of the most iconic names in Jailbreaking has to be Jay Freeman, known by most as Saurik (his Twitter handle). Over the years as Jailbreaking has grown, Freeman has become somewhat of an underground celebrity. Considering he has over 300,000 Twitter followers and is responsible for the software that millions of people use around the world it is no wonder why.

Apparently the first time a stranger recognized Freeman was back during the iPhone 3GS days, while Freeman was visiting a local BestBuy trying to find a hackable TV for his office. The individual who was the first stranger to recognize Freeman, recently posted a photo of this encounter on imgur, which went viral on Reddit.

Just how has Freeman’s life changed since the days of the iPhone 3GS? Well, according the Freeman himself, it definitely has. Freeman has written an in-depth piece that is “novel-long” which is definitely worth reading on the Reddit thread. I am not going to quote the entire piece as it is incredibly long and there is also a lot of followup comments from Saurik, but I urge you to check it out yourself. 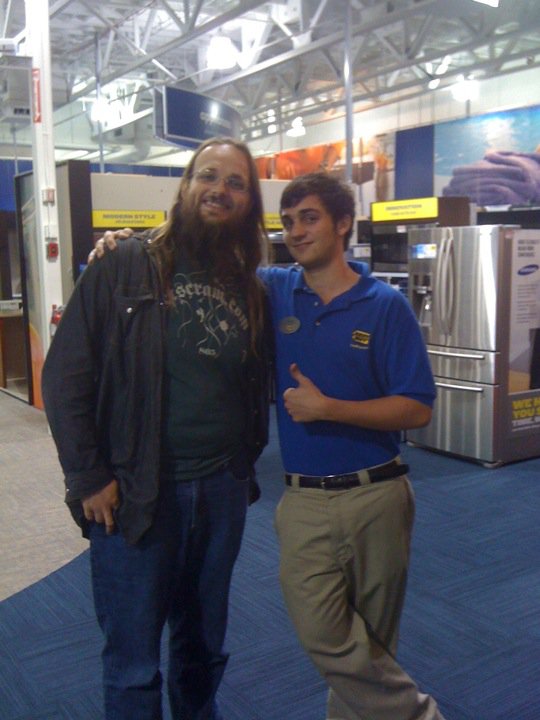 Here are just a few tidbits…

Today, the situation is a little different: I actually get recognized a lot. Sometimes it is kind of cool, sometimes it is really awkward. It mostly, however, comes down to people wanting to ask me the question “so, when’s the next jailbreak coming out?”. I’ve mostly gotten used to the idea that the bartender will ask me this while pouring my club soda, and I’m totally acclimated to the manager of the bank asking me this while approving my wire transfers (often now after the teller had already asked me the same question). I’m only somewhat surprised when the guy at the kitchen appliance store asks me.

I also find myself buying things online more often than going to a store, as I am less likely to be judged about buying something totally normal (like maybe some esoteric cooking equipment, or maybe something that isn’t manly enough for Internet commenters… oh, imagine me purchasing something like a beard trimmer?… sigh). Other times, it is just bothersome in the moment, but doesn’t really matter later: like, I’m more than happy to say that my taste in movies is really far into “romantic comedy”-land, or that I grew up listening to Country music due to my mother (and thereby still quite enjoy it); however, the live judgement that comes from the person at the store knowing exactly who you are and having a bunch of real or even made up context for these things above and beyond the self-evident “somewhat fat guy with a beard” can make them awkward in the moment.

I don’t, however, regret having ended up in a situation as public as I currently am, and by and large my interactions with people (such as yzzr, the OP) have been positive. random people, in actuality, tend to be “cool”, and most of them really just want to know “when is the next jailbreak coming out” (as opposed to complaining about something they feel I did wrong somehow, which is a different situation).

For all of those thinking that Freeman reveals the status of the iOS 6 Untethered Jailbreak, think again. While Freeman definitely does help in the Jailbreaking efforts, the main individuals working on it are ultimately prominent developers such as Pod2G and Planetbeing. Freeman said himself that he often paraphrases tweets or status updates from these individuals when he is asked in public.

After reading Freeman’s lengthy post on Reddit I couldn’t help but wonder when a biography would be coming… What do you think? Would you read a biography on Jay Freeman and everything he has done for Jailbreaking? Let us know in the comments section below.